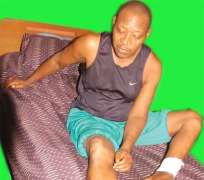 Prince James Uche's last week's distress cry for help was not in vain after all, as Governor Theodore Orji of Abia State and some well-meaning Nigerians during the week donated cash and material gifts to facilitate the treatment of the ailing actor.

HVP last week reported the story of Uche's illness, raising alarm that given the failing state of his health, and with no aid coming his way as fast as possible, the veteran actor may not survive the ailment that has left him bedridden for the past eight months.

According to him, “if not for NFC, which reported the story of my illness, I would have been dead by now. Since the publication was made last Saturday, I have been receiving calls and kind gestures from well-meaning Nigerians. I'm grateful to those who responded positively to my distress call.”

On the the show of indifference exhibited by his colleagues in the movie industry, some of whom he accused of abandoning him when he needed them most, the veteran actor vowed to quit acting as soon as he leaves the hospital bed. He however promised to set up an health insurance scheme for Nollywood as a way of immortalising his sad experience.

Until this week, Uche was said to be ignorant of the nature of his illness. Dr. John Mba, Medical Director, Pax Medical Centre, Surulere, where Uche is currently recieving treatment told HVP during the week that the Abia State born actor was diagnosed of chronic leg ulcer and diabetes coupled with hypertension.

The ailment, according to Dr. Mba deteriorated because the tough-talking actor did not seek medical solution to his illness on time.

He was however optmistic that given proper medical attention Uche will recover from the ailment, adding that “ enough funds is required to facilitate his treatment.”

Speaking further, Dr. Mba said, “Uche had no idea of what he was suffering from, until he was brought to this hospital. His case was unimaginable when he was rushed here. Owing to inadequate treatment he developed chronic leg ulcer and diabetes. But that does not rule out the fact that his case cannot be treated.”

Uche was admitted at Pax Medical Clinic, in Ijesha-Tedo, Surulere, three weeks ago after he fell into coma for three days. His ordeal started in November last year when he collided with the chain of a BRT bus median in Anthony Village area of Lagos, leading to his sustaining severe injury on his left leg.

At first, the bulky actor who has starred in several movies including, “Fair Game”, “Stubborn Billionaires”, “Big Boys Club”, “Dangerous Mind', “Dons In Abuja”, 'Town In Danger' and “Rituals” to mention a few, thought it was a minor bruise until his condition began to deteriorate. And since then, doctors have been battling to save his life.