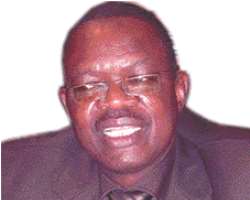 Fred Agbaje
While President Goodluck Jonathan keeps mute over his ambition to run in the 2011 presidential election, human rights activist, Barister Fred Agbaje says he should not run because it would be an act of betrayal.

'If there is an arrangement on the ground, he must comply with it. He shouldn't overlook the unfortunate situation that brought him to power.

I am not a PDP man, and I don't belong to any political party. Why do you want to remove the ladder that brought you up? Does that not amount to political betrayal? What I don't like about the political elite is that most of these political intellectuals are dishonest. After benefitting from zoning arrangement, they are now condemning it as criminal and unconstitutional', Agbaje said.

In an exclusive interview with Daily Sun, Agbaje spoke on this and other related issues.

Excerpts:
Assessment of Jonathan's style of administration so far

I must be very sincere with you. I cannot pigeonhole the type of administrative style Goodluck Jonathan is adopting. What has he done? At least as at today, I cannot holistically pin-point that, this is Jonathan's style. As at now, it is all motion, no movement. The truth of the matter is, I like Goodluck and I like the fact that he is there, and is educated enough. He has been in government for the past twelve years.

Therefore, he is expected to know the political terrain. I give him that benefit, but I want somebody to tell me categorically as at today what he has been able to do so far. If there is one, that person is an irredeemable liar. Such a person is not prophesying rightly, because there is no basis. Prophesy is about knowing where you are coming from, the past, the present and then you are able to determine the future.

People of Nigeria are telling Jonathan to address the problem of electoral reform, power and corruption. If those three things can be done, even if it is power he tackles successfully, the other three will be added unto him. Nigerian people will be the one that will be begging Jonathan to contest. But now, there is nothing in that direction, though I don't know about tomorrow. All we are hearing now is euphemistical declaration.

Should Jonathan run?
I'm a constitutional lawyer, and I know the implication of agreement. If there had been an agreement as to where the president should come from, why are you going away from it? According to lawyers, agreement is agreement. You can not approbate and reprobate. It is inequitable. It is against all norms of morality and good conscience. And if there is no agreement, anybody can contest. When the dictator in Ota was the beneficiary of the arrangement and he is now making 360 U-turn, we begin to fear. It is this Balogun of Ota farm that is behind Jonathan to run.

And I told you from the beginning of this interview that Jonathan is an intelligent man. He should not allow anybody to mislead him and pollute his political clout. If I were him, I'll pick only one out of the three issues. And I implore him to distance himself from the seven point agenda, because his late predecessor's seven point agenda became pointless because he could not see anyone of them to hold. If Nigerians get home and have like five hours uninterrupted power supply, Nigerians will be the one to beg him to continue in office. The next political dispensation, we don't know the depth.

We only have to be careful. We must consider the political antecedence of candidates before voting for them. That is what Jonathan should address, otherwise what is his business in the birthday jamboree of the man in Ibadan? How does that add to the people of Oyo State, the democratic gain, if there is anything like that? And I read in the papers that the man has failed to deliver the gains of democracy in his state. Is that the man he should be dinning with and wasting federal resources on? What is the official nature of that birthday to the office of the president that will make him put all machinery on ground to go there?

The choice is his to run. I have not gotten anything, as to why I will join the maddening crowd who say he should run. I stay in the midst of the people in Bariga here. I'm closer to the people at the grassroots here, because I'm a lawyer to the people, and I can not distance myself away from them. I hear their complaints, and I know what they are going through.

We are running power generator since morning . Imagine the whole neighbourhood, has been in darkness without generator, and you are talking about next president. As a role model, you must be honest. The Bible says you will know the truth and it shall set you free. It is not that we don't know the truth in this country, but we can't say the truth, and that is why so many things are not working well in this country. This is because, we are in the world of make believe and fantasy.

Zoning arrangement
As I said earlier, if there is an arrangement on the ground, he must comply with it. He shouldn't overlook the unfortunate situation that brought him to power. I'm not a PDP man, and I don't belong to any political party. Why do you want to remove the ladder that brought you up? Does that not amount to political betrayal? What I don't like about political elite is that most of these political intellectuals are dishonest.

Do you agree Jonathan is Obasanjo's stooge?
I have no empirical evidence to support that assertion. As far as I'm concerned, I see more of assertion by the assumption of the populace. I do not see Jonathan as who will want to be a stooge to anybody. Although, Obasanjo is instrumental to his emergence as president. What political formula made PDP and Obasanjo to arrive at that political arrangement, if not zoning? If Yar'Adua is alive, would anybody talk against zoning?

The political permutation and calculation that came up after the demise of Yar'Adua thrust on Goodluck the presidency. If I were him, I will just work till May next year May and I will go home. By this, people will reckon with him and even put him in the same cadre with Nelson Mandela.