I’m married to movies –‘Asewo to re Mecca’ Toyin Adegbola 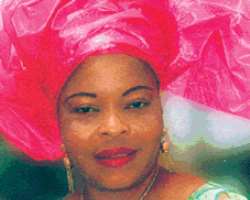 Perhaps pretty and charming actress, Toyin Adegbola (nee Babatope) was on the verge of fulfilling her destiny when she joined the then Television Service of Oyo State in 1982. As a young artiste, who had studied Electronics, becoming an actress to Toyin (now fondly referred to as Asewo to re Mecca) could have ended a mere dream. But destiny walked her way and she was soon to be discovered on the set on a children's drama, entitled: Fogbonyo.

“It was while presenting that children's drama that a filmmaker, Tubosun Odunsi, discovered me. He saw me acting and concluded I could become a great actress. He invited me to his location at Abeokuta and Osogbo. But because I was then a civil servant, I needed permission from my boss to be allowed to shoot without asking for financial reward.”

Eventually, Toyin's boss, Mr. Adebisi Adesola, came to her aid having promised to obey the civil service requirements. Of course, the young actress had won prizes in her school and church for stage performances, but her break came through her role in such films like Paadi Mekailu and Kannakanna.

But talking about becoming a star and a brand at the same time, Toyin Adegbola would not forget other benefactors like Adebayo Salami(oga bello), who showcased her talents to the globe. Although she had featured in several movies before enlisting on the of Asewo to re Mecca, the actress said her first home video shot into limelight. Her words: “Suddenly, people did now want to know where I was and what I was doing. I went to Mecca and people started calling me Asewo to re Mecca. We have produced othe movies to change that name but people have refused to change the name for me.

All I know is that I'm not into prostitution (Asewo) but since acting is what brings me money, I don't mind.”
As part of challenges in her acting career, Adegbola recalled the loss of her husband (a journalist) in 2000. She recalled how loving and understanding her husband was, even when he knew she was an actress. Actually, they both met at the BCOS Ibadan and she had been acting before they got married. But death came calling 10 years ago and she became a widow.

Said Adegbola, “losing a husband at such a young age was quite challenging for me. It was not easy for me at all but to the glory of God I've been able to raise my children and I have a reason to be happy today.”. When asked why she has refused to re-marry, Adegbola answered “to whom? To a man who will accept me as a wife and also accept my children and their responsibilities? I do not want to lose the respect of my children. That is why I've stayed single and taking care of my kids.

Another major challenge in her acting career is piracy. Adegbola lamented how pirates and their cronies have almost driven artistes (and sometimes producers) like her out of the market. She described piracy as a crime against actors, musicians and filmmakers just as she urged government at all level to help eradicate the scourge.

Having acted for the past 26 years, Adegbola said her acting career has been most fulfilling. She recalled her fame and recognition in Nigeria and beyond. She also listed many awards given to her by the Osun State Government- her home state. Some of her credits till date include Keshinro, Mayowa, Tolani To re London, Toyin Tomato, Olorioko, among others.

Adegbola who explained how she usually brings herself to character, also disclosed her fruitful career as a producer. Her words: “As a good actress/actor, one must be able to interpret whatever role perfectly but people who know me and trust me usually call me to their locations. And it is from this that I earn income to feed my family. I always like to digest my scripts quite well and ensure that I give my director what he wants. As actors, actresses, we are nothing but teachers, because we portray reality in a dramatic way.”