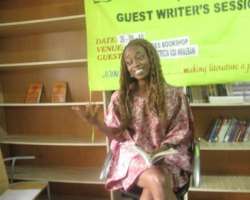 
The June edition of Abuja Writers Forum’s (AWF) Guest Writer’s Session that held on 26th June was like no other before it. It lived up to its billings on every parameter. On hand to read was Ms. Adaobi Tricia Nwaubani whose deafening buzz after winning the Commonwealth Prize with her debut novel has gone international now. Ever since she was announced as the 2010 Commonwealth Writers Prize winner for Best First Book (Africa), her profile has continued to point skywards. ã€€ã€€

The audience was fully seated by the time Nwaubani daintily stepped up to AWF’s ‘Hot Seat’ in her short, flowery red dress and white wedges wearing her trademark bronze-coloured attachment, at the Pen and Pages Bookshop venue. Shortly before she did, Sola Odulusi, a studio fine artist had showcased paintings and artworks, one of the regular side attractions to the day’s main event. Before the Guest Writer took the Hot Seat, the compere for the event, Oluchi Agbanyim, had brought on El Nathan John who read a short citation to introduce the guest writer. Nwaubani was well composed as she read from her novel. The reading almost turned interactive with the audience joining with "oohs!" and "aahs!" following the cadences of the engaging tale.

Nwaubani’sã€€novel, l Do Not Come To You By Chance, is about financial scam, a.k.a 419, which has earned Nigeria some notoriety – some would say popularity – internationally. A jobless graduate full of a young man’s idealism is forced by family adversity to go begging for assistance from his 419 kingpin uncle, Cash Daddy. That presents the con don apt opportunity to arm-twist and try recruiting his young relation into the loathsome "business".

The book had been presented in diverse media as a refreshingly different, humorous departure from the dour literary field.ã€€ There were testimonies of having read the bookã€€ã€€ all through the night, or over a couple of sittings among Nwaubani’s audience. Some described the bookã€€as unputdownable.ã€€ ã€€ã€€

Reading over, it was timeã€€for questions and comments from the audience among whom were the author’s mother and guests from as far afield as Makurdi and Awka. Members of the diplomatic corps were also in attendance among whom were Mrs Eva Bertha and her husband from the Spanish Embassy; Mr Peter Claussen of the US Embassy as well as ace TV personality, Eugenia Abu and Bibi Bakare-Yusuf of CassavaRepublic. Comments and questions from the audience came in volleys. The author was asked who her favourite author was and how long it took to write the novel. Others wanted to know about her experience with Writer’s Block,ã€€how she pulled off the coup for a foreign publisherã€€and whether she experienced the 419 subject of her book. President and founder of AWF, Dr. Emman Shehu, wanted to know if her book borrowed anything from Psychology, her discipline, and the connection with the Snowflakes writing style.

Nwaubani took on each question shooting from the hips. P.G. Woodhouse is her favourite author for his witty writing and I Do Not Come To You By Chance was written between January and February 2007. She pleasantly shocked the audience by revealing that she does not experience Writer’s Block and dismissed it as a Western concept. And of her award-winning book, she said when her mother read it, she commented that she read glimpser "of my sharp mouth" – a comment that made someone in the audience remark that Nwaubani’s mother must have read her natural ‘voice’ in the book.ã€€ She got published abroad through a literary agent she got on-line, and the scam art which was flourishing all over the eastern part of the country provided her with the laboratory for her work. On symbiosis with Psychology, she agreed there would have been lots of injections from social psychology which enables you observe the transformation of the personality of the individual. Then she revealed how she came about Snowflakes by using the Google search engine. She also gave kudos to her Nigerian and overseas publishers for the depth of editing work they did on her raw manuscript. Her Nigerian publishers were in the hall with a cache of the book which sold like hot cake.

The highly satisfying evening’s literary menu dovetailed into a culinary one as Dr. Emman Shehu announced it was the second anniversary of the precocious literary body. The anniversary cake was cut with wining and dining. There were comments on how well organized the event was. Comments by the Guest Writer on the successful reading and book signing showed that the event was the outcome of long time planning, a reflection of the fact that she did not come to Abuja Writers Forum by chance.ã€€ ã€€ã€€ã€€ã€€ã€€ã€€