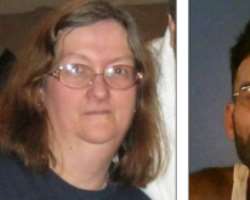 A 64-year-old mother and her 43-year-old son were allegedly caught having sexual relations by his wife.

The United States pair are facing the possibility of 20 years behind bars if they are found guilty on incest charges.

The son reportedly said the May 20 encounter was the first time he had ever had sex with his mum.

“I don't know. It just happened,” an police officer reported Tony L Lavoie, from Fitchburg, Massachusetts, of saying as he was questioned about the May 20 incident.

Lavoie was living with his mum Cheryl Lavoie at the same house at the time.

Police were called to reports of a disturbance in the house and greeted by the wife’s cousin, according to local newspaper The Sentinel and Enterprise.

The cousin reportedly told an officer that Lavoie's wife had called her about walking in on her husband having sex with his mum, and then had phoned 911.

The officer spoke to the mum and son separately and both acknowledged they had consensual sexual relations and said it was the first time it had happened, police said.