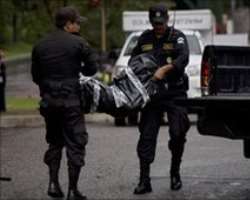 The Guatemalan government says the latest in a series of gruesome murders will not make it give in to demands by gangs to loosen prison rules.

On Monday, a female prison official was kidnapped, tortured and killed.

Her dismembered body was found along with a message addressed to the prison authorities, saying attacks like that would continue unless inmates' demands were met.

Under them, prisoners are no longer allowed to receive parcels from the outside, or conjugal visits. They are also moved more often from one prison to another.

The authorities say the measures were taken to stop convicts continuing to run criminal enterprises from behind bars.

But the backlash has been fierce. Less than three weeks ago, four severed heads were left in public places around the capital with similar messages to the interior minister and the director of prisons.

'This will go on'
At a news conference at the time, Interior Minister Carlos Menocal read out one of the messages, which had been written on cardboard and propped up against the remains.

“This is happening because of the mistreatment and the injustices in the country's jails,” the message read.

“If you don't do anything about these mistreatments, what happens from now on will be the fault of the government and the prison system, who are the ones abusing their authority.”

Monday's victim was identified by local media as the 45-year-old head of personnel at a men's prison.

Police said alleged gang members had shot her husband, a former guard at the same prison, and kidnapped her.

Her dismembered body, which showed signs of torture, was dumped in four separate plastic bags in front of a radio station.

A message found in one of the bags read: “If you continue violating our rights, this will go on.”

A spokesman for the interior ministry blamed gangs for the murders and said their demands would not be met.

He said the “savage way” in which they had acted would be met with a further increase in security checks at the country's prisons.