HOW TO MANAGE BENIGN PROSTATIC HYPERPLASIA 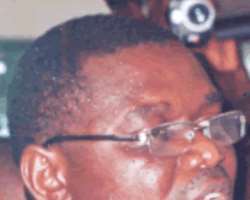 Prof. Onyebuchi Chukwu Minister of Health
All four terms – prostatic hyperplasia~ prostatic hypertrophy. adenoma of the neck of the bladder and adenoma of the prostate are in fact from the pathological and histological points of view inaccurate designations of the disease which generally occurs in men in their fifties. According to Pharm Sade Filani, it refers to fibromyomatous proliferation of the urethra mantle in the paraurethral connective tissue involving the urethral glands which generally originates in the colliculus seminalis~ but also may be multifocal.

Function of the prostate
The prostate is a sex gland in which, under the influence of the testosterone produced in the testes, a thin, milky, cloudy alkaline secretion is formed, which serves as the transport medium for the sperm cells. It is therefore an essential organ for reproduction.

The alkaline content of the secretion accounts for the motility and fertility of the spermatozoa which originally are immobile and therefore not capable of fertilization.

Pathological anatomy
The process starts with the formation of a large number of fibroadenomatous nodules which appear simultaneously under the epithelium of the posterior urethra, enlarge concentrically, compress the normal prostatic tissue against the capsule or the prostate and displace it sideways.

As a result of the proliferation of the adenoma the posterior urethra which passes through the prostate, is constricted and micturition is more or less impaired.

Epidemiology
Benign prostatic hyperplasia is the most frequent cause of disturbances of micturition. As a rule, 50 percent of men over the age of 50 are already affected. by it, while in men in their sixties the proportion is 60 percent and in those in their seventies and eighties it is 80 percent.

Aetiology
In spite of tile numerous studies which have been carried out, the cause of BPI has not been clarified up to now. It is assumed to be associated with changes in the hormonal balance due to aging (the prostate is a hormonelependent organ). In men, after the age of 40 there is a decrease in the male sex hormones, while the level of the female sex hormones remains constant. The increased stimulation by the female sex hormones leads to proliferation of the perimethral glands and to the growth of muscle fibres (myomas) and connective tissue (fibromas). One can therefore also speak of BPE as fibrodenoma of the posterior urethra.

Symptomatology
The development of prostatic hyperplasia can he divided into four stages: Latent stage: no symptoms. The so-called irritative stage: weakened urinary stream, symptoms of pollakiuria, nycturia, dysuria, no residual urine This stage can develop over a period of several years, or may even remain stationary. Stage of compensated

urine retention: increased pollakiuria and nycturia, residual urine, reduction of the functional capacity of the bladder. Stage of decompensated urine retention: constant dribbling of urine (ischuria paradoxa = overflow incontinence). The bladder is overstretched and often filled with up to 1 litre of urine, which in contrast to true urine retention is not painful.

There is reflux of the urine into the upper urinary tract, and then into the kidneys. The renal function decreases continually, eventually leading to kidney failure (uraemia).

The course of BPH can also last for several years. until the musculature of the bladder gradually fails and the hitherto thick-walled bladder becomes slack.

In all the stages of the disease, sitting for a long time, holding back the urine, cold, anesthetics and excessive beer drinking can lead to acute urine retention, which is very painful and can only be relieve by introduction of a cathetec.

Treatment of prostatic hyperplasia and disturbances of micturition

Preventive therapy is still not possible. It is also not yet possible to achieve regression of the hyperplasia, but the symptoms and discomfort during micturition, on the other hand, can be improved by drugs.

Surgical treatment
Surgical treatment is inclicated in case of single of recurrent urinary obstruction – residual urine of more than 50 rnl , untreatable discomfort during micturition, with restricted urinary flow – the appearance of bleeding. Early surgery is indicated, in order to prevent irreparable damage to the kidneys.

Drug therapy
An exclusively drug-based therapy can be considered only in the early stage. The second, or irritative stage can last for many years, and sometimes it in fact never passes into the third stage. The following substances are used in the conservative drug therapy of prostatic hyperplasia: – organ extracts – alpha-receptor blockers – calcium antagonists – hormones – plant extracts.

Of all these active substances, the plant extracts have proved best in practice, because they are practically free from side effects and can be used over long periods.

Prostatonin is for the symptomatic treatment of functional disturbances in beginning benign prostatic hyperplasia, such as pollaktuna, dysuna urinary incontinence and weak urinary stream. Prostatonin is a continuation preparation from standardized extracts of the plants. Pygeum africanums and uretica dioca which are also administered as individual preparations.