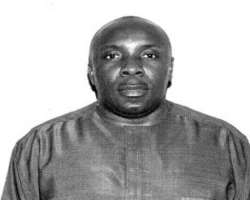 
ABUJA, June 27, (THEWILL) – Senator John James Akpanudoedehe, a former Minister of State, Federal Capital Territory (FCT), who was arrested and detained on Thursday over the murder of a former Zonal Secretary of the Peoples Democratic party (PDP) in the South –South Zone, Elder Paul Inyang has distanced himself and his group from the murder.

In a press statement titled ‘Murder of PDP Chieftain in Akwa Ibom State’, dated June 24, 2010, signed by Senator Akpanudoedehe and made available to THEWILL today, the politician accused Akwa Ibom State Governor, Godswill Akpabio of complicity in the murder of the politician.

Apkanudoedehe said, "On Sunday, June 20, 2010, the people of Akwa Ibom State, and in deed Nigerians, heard the shocking news of the murder in broad daylight of Chief Paul Inyang, the former South-South Zonal Secretary of our party – the Peoples Democratic Party (PDP).

"While wholeheartedly condemning this ignoble act, I join millions of grieving Akwa Ibomites in commiserating with the family of the deceased. This incident has further highlighted the unacceptably elevated level of insecurity in our beloved ‘Land of Promise’. Now, the question on every Akwa Ibomite’s lips is: Who is next?

"To rub salt to injury, the state government unashamedly declared the ‘opposition’ guilty of the brutal killing of Chief Paul Inyang, minutes after the dastardly act was committed, even before the police had commenced investigation.

"This falls perfectly in tandem with the issues raised in my letter to the National Security Adviser and the law enforcement agencies, stressing the fact that the level of insecurity in Akwa Ibom State has become unbearable.

"But that is to be expected in a state where the governor has acquired helicopters and kept them at his beck and call while the entire State Police Command has no single one to fight crime in the State; a government in which the Governor’s mushroom support groups numbering over 2000 each have brand new buses while one can hardly point to a single Divisional Police Officer (DPO) having a functional vehicle; a government that has failed woefully to discharge its responsibility of caring for the lives and property of its people but rather plays politics with lives of the Akwa Ibom people; a government that has never brought any criminal to book despite uncountable cases of kidnapping and murder, and a government that has refused to sign the Death Penalty that would stem kidnapping in the State.

"For the records, Chief Paul Inyang was a loyal PDP member and, in recognition of this fact, the immediate-past Governor of the State, Obong Victor Attah, nominated him for the position of Zonal Secretary of the PDP (South-South Zone), a position he held till 2007. This therefore puts a lie to claims by the government that the deceased was a ‘strong supporter’ of the current administration.

"By laying the blame for Inyang’s murder on the ‘opposition’ even ahead of police investigation, the state government is employing scare tactics and wants to be the judge in its own case. This tends to direct the focus away from the state government but this attempt to fool Nigerians has failed woefully as the public has become wiser with the antics of the current administration in the state.

"The choice of the ‘opposition’ as the ‘fall guy’ is not strange when one recalls Governor Akpabio’s injunctions to a group known as Coalition of PDP Aborigenes as well-documented in the Friday, May 14 2010 edition of Daily Independent. In the said publication, Governor Akpabio was quoted as follows: "You must rise up with anger and crush anybody who wants to bring down the government. You must crush any opposition against this government with fire. You must show anger because we are developing our state and nobody should stand against the development of the state".

"For the umpteenth time, I call on the National Security Adviser, the Inspector General of Police, the Director General of the State Security Services, and all law enforcement agencies to thoroughly investigate the murder of Chief Paul Inyang as well as several other unresolved cases, especially that involving one Nathaniel Uyo and bring the perpetrators of these atrocities to justice.

"On our part, we disassociate ourselves from thuggery, murder or any such vice and remind the good people of Akwa Ibom State that the power to change the current incompetent administration, come 2011, is in their hands."