Urgent Cases Of Child Abuse In My Neighborhood! 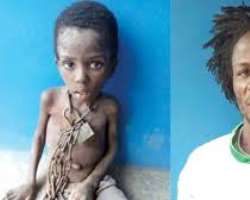 1. I noticed a deep cut along the brow line of a 10—year old, accused him of roughness at play as the cause but boy confesses that the cut was caused by his single mother who stomped on his head severally having fallen when she was beating him.

I personally witnessed as the same woman viciously hit the head of another but senior son on the perimeter wall of the building where she stayed. She rained several blows at the boy's head and it took the physical restraint of male bachelors who were co—tenants to prevent her from repeat hits of the boy's head on the wall.

2. I returned from work only to see some crude plastering atop the head of a son of another woman. So, I went on: "what happened to your head? You've been engaged in playing rough again, àbí? " But boy rather replied: "no sir, it's my mother who smashed an 'omorogun' on my head. A lot of blood was coming out. My school uniform was soaked with blood! She now applied spirit and plastered the wound" .

3." Be knocking on the wall with all your strength so I hear it clearly "!, another woman yelled as she commanded an 8—year old girl to do her bidding. The sound made by impact of bone on concrete reached me as clearly as the head bang on wall described in number 1.

4. Yet another woman who seems to derive joy from first pouring cold water on her daughter before subjecting her to severe beatings.

All cited culprits are women.
Now, all these women live alone with the children. So, it cannot be that they are merely visiting on these kids what they themselves have suffered from their fathers, in frustration. It is a recurring decimal and cannot just be attributed merely to the frustrations and hunger of Covid-19 lockdown.

There are more.
I have had cause to call these women to talk to them. On several occasions, I also explained the consequences of their actions to them and even showed them medical illustrations to drive home my point.

I was even as graphic as to telling the head banger that she risks damaging the boy's brain. That she could injure and cause far—reaching damage to the eye she kicked.

I showed the one who instructed the said girl to knock on concrete that her victim could be left with damaged extensor tendons or finger and hand amputations, also providing anatomical illustrations to gain effect.

Now, there are reckless efforts to adversely rewrite the life scripts of these kids by these women... the most telling being the psychological rather than the physical.

So, these kids having even stewed in violence, may end up being doctors who slap nurses or bank MDs who slap gatemen.

Doctors describe right—handed persons as being left—hemispheric dominant... because one side of the body is controlled by the cerebral hemisphere on the opposite side of the body.... and these prime structures are the ones viciously assaulted by these adults.

They all know I am a doctor.