G20 SUMMIT IS CLOSE TO AN AGREEMENT ON RECESSION RISKS 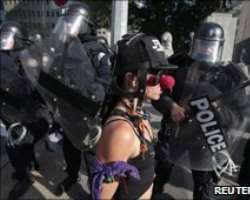 Leaders at the G20 summit are trying to thrash out an agreement to cut national budget deficits within three years.

The group of 20 leading and emerging nations, meeting in Canada, are split over the pace of budget cuts.

But German Chancellor Angela Merkel said on the Sunday the G20 was moving towards a deal to co-ordinate cuts by 2013.

“This will be part of the final document,” Mrs Merkel told reporters as she arrived at the meeting in Toronto for the final day of talks.

However, she stressed the deal would only apply to the most developed economies, after emerging countries protested that deep cuts would hurt their export-dependent industries.

'Scars'
On Friday US Treasury Secretary Timothy Geithner echoed comments by Mr Obama last week when he said the summit should be about growth not cuts.

“The scars of this crisis are still with us. This summit must be fundamentally about growth,” Mr Geithner said.

The UK, France, and Germany, have already led moves to slash record public deficits, despite opposition from the United States which is saddled with a 1.3-trillion-dollar debt.

Cut or spend?
But with countries emerging from the global downturn at different speeds, splits have emerged on how to proceed.

Spooked by attacks on the euro currency prompted by Greece's debt crisis, European governments have focused on cutting spending to reduce their deficits.

A draft version of the summit's statement suggested the Group of 20 richest and emerging economies was nearing a compromise, Reuters news agency said.

This would see an agreement to halve budget deficits by three years and toughen banking regulations.

“Because instead of stimulating growth they pay more attention to fiscal adjustments, and if they are exporters they will be reforming at our cost.”

North Korea warning
Demonstrations by thousands of people turned violent on Saturday as some protesters clashed with police and vandalised buildings. By the start of summit talks on Sunday about 500 people had been arrested, police said.

Thousands of demonstrators marched on the G20 summit on Saturday in what is being reported to have been a largely peacefully rally that saw outbreaks of violence on its edges. These saw groups of young men scuffle with riot police and set fire to at least two patrol cars.

The G20 meeting follows the summit of the G8 group of industrialised nations, which met at a lakeside resort outside Toronto.

They condemned North Korea for the sinking of a South Korean warship in March.

The G8 leaders also criticised North Korea – and Iran – over their nuclear activities, and they described the Israeli blockade of the Gaza Strip as “not sustainable”.

And they admitted that the global financial crisis had compromised efforts to meet UN targets for reducing world poverty.

On Friday, they agreed to donate $5bn (£3.3bn) over five years towards improving the health of mothers and young children in the developing world.