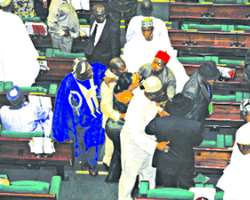 During the fracas some of the members were beaten black and blue, and had their arms broken as well as clothes torn.

Melaye and Nwachukwu were later arrested by the police over the mayhem in the House.

There was an anticipation that yesterday's session of the House, holding after a vacation, would be rowdy.

Members who had arrived early to take their seats inside the chamber were searched by securitymen who had taken strategic positions within the National Assembly complex. Visitors and workers were equally frisked before they were allowed access to their offices and the Press Gallery.

Plenary commenced after Bankole entered and read a communication from President Goodluck Jonathan, asking for the leave of the lawmakers to grant loans to the Island of Sao Tome and Principe.

He then invited Mr Chile Igbauwa , PDP member from Benue State to move his motion bordering on powers and privileges as a member of the House.

He said he was compelled to respond to the various actions of the 'Progressives' under the leadership of Mr Dino Melaye, which, he added, were casting aspersion on the House and presented the House as not capable of resolving its problem.

'While relevant sections of the 1999 Constitution guarantee the freedom of opinion and expression, it must be done within the context of procedure so as not to infringe on the rights and privileges of others, in this case, members of the House. The recent attacks on the Speaker and principal officers of this Honourable House on television and the pages of newspapers, have cast serious dent on the image of this Honourable House,' he stated.

'Therefore, for failing to adhere to the provisions of the Legislative Houses [Power and Privileges Act, Code of Conduct for honourable members and the Rules of the House, in stating their grievances and for taking their matter to the public domain with the view to maliciously bring the image of the House into disrepute, I hereby move the House in the following terms,' he said.

Melaye, who had envisaged that a suspension would be slammed on him and his group raised a point of order, which the Speaker ignored.

Melaye jumped from his seat, shouting 'No! No! You can not do it, We will not take it, it will never happen.' He was joined by Mrs Uboh to protest the motion for suspension.

A melee ensued as members left their seats, to position themselves for the fight which eventually broke out.

Mr Ishaku Bawa pulled back Uboh from her seat, while Melaye snatched the motion paper from Igbauwa and tore it into shreds.

Prompt intervention of men of the Sergeant-at-Arms and plain clothes security men, who had positioned themselves inside the chamber and formed a ring around the mace, prevented it from being forcefully removed by Solomon Awhinawhi. He later left the chamber with a bruised nose.

At a point the securitymen took away the mace from the table, but returned it to the table for the Speaker to read the names of members in the list passed on to him by the Chief Whip, Emeka Ihedioha.

Bankole quickly read the names of members placed on suspension and ordered the Sergeant-at-Arms to use reasonable force to take them out of the chamber.

From there, the chamber became rowdy as members massed around the mace, while some formed a defence wall around the Speakers' podium.

Members decided to bundle their colleagues out of the chamber. First to be bundled out was Mrs Uboh, who was dragged on the floor and a member seized her shoes and flung it, even as she protested against the humiliation.

After her forced exit, members pounced on Awhinawhi as he was sandwitched by six members and pulled out of the chamber with blood oozing from his nose.

Next on the line was Mr Austin Nwachukwu. Before his eviction, he took on Chinyere Igwe and broke his arm, Nwachukwu's clothes were torn and he was lifted out of the chamber.

The arrowhead of the plot to remove the Speaker , Mr Melaye became the next target. He was surrounded by five members, pushed to the floor and was shoved aside before he was taken out. He lost his cap.

Before the eviction was concluded, Independence Ogunewe, West Idahosa, Gbenga Onigbogi quietly walked out of the chamber.

The last member to be taken out forcefully was Mr Kaze. While his colleagues in the Progressives were being taken one after the other, he sat down and was watching the drama.

By the time they came for him, he was surrounded by about 10 members and was lifted up from his seat. A member pulled his gown from behind and he was hit on head.

After the eviction, members clapped and the plenary was called to order for the business of the day to commence.

Spokesman of the House, Mr Eseme Eyiboh later told journalists that one of the suspended members, Austin Nwachukwu entered the chamber with a dangerous weapon.

'Nwachukwu came to the chamber with tear gas and other dangerous weapons. This does not fall within his parliamentary powers. In the same manner, Mr Melaye came into the chamber with a whistle, which is not part of our legislative tools,' he stated.

Eyiboh said the leadership of the House and members acted within the purview of the law and the allowances for a disciplined organ.

The spokesman explained that the suspension of the 11 members was not because they decided to report the Speaker to the Economic and Financial Crimes Commission [EFCC], but because they failed to explore the House rules to resolve any differences.

CID Maduabum said it was scandalous for a member to enter the chamber with weapons and he was making way to remove the mace.

Reacting to their suspension, Melaye said that it was the height of tyranny.

' This is the height of tyranny. What they are accusing us of is what Eyiboh has done. He and Bankole are guilty of talking to the Press. There is nowhere in our rules that we cannot talk to the Press. Agoda did the same during Etteh, Farouk Lawal did the same. We shall not allow this. They refused to react to our allegation, instead they suspended us. This is collaborative tyranny,' he said.

Accredited journalists covering the House were equally subjected to harassment by security agents as attempts were made to seize their working tools.

Gbenga Olamikan of Vanguard had his camera seized. It was the protest by his colleagues, that saved him. Reporters from Compass, Wole Oladimeji and Julius Toba were also molested, while Rotimi Akinwumi of Daily Independent had his handset removed.

Meanwhile, spokesman of the FCT Police Command, Mr Jimoh Moshood, confirmed to Daily Sun that the Commissioner of Police, Mr John Haruna, invited Melaye and Nwachukwu over the roles they played in the fracas, which rocked the House early in the day.

Specifically, he stated that Melaye and Nwachukwu were quizzed and detained over the injuries inflicted on Mr Chinyere Igwe, representing Port Harcourt federal constituency of Rivers State who had his arm broken after he was allegedly floored by Nwachukwu during the fracas.

'It is true that Messrs Melaye and Nwachukwu were invited by the Commissioner of Police. They were questioned over the attack on another member of the House, Mr Chinyere Igwe.

'I cannot confirm to you if they have been released or not. All I know is that the CP ordered for their interrogation,' he said.