Shell In The Dock Over Nigerian Executions 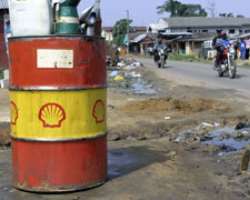 By Thijs Bouwknegt
One of the world's largest oil producers will be called to account this week over human rights abuses in Nigeria. The trial comes fourteen years after the execution of writer and human rights activist Ken Saro-Wiwa by Nigeria's former military junta.

A New York district court will deal with what has been described as the most prominent case of alleged corporate responsibility to date. From Wednesday, the court will look at allegations that Royal Dutch Shell - which has dominated Nigeria's oil sector for decades - sought help from the Nigerian military junta in silencing human rights activist Ken Saro-Wiwa.

Shell, which strongly denies the charges, is also accused of paying soldiers who carried out widespread human rights abuses in the oil-rich Niger Delta.

Niger Delta
Royal Dutch Shell began oil production in the Niger Delta in 1958. Oil spills, gas flaring and deforestation soon stripped the Delta of its environmental resources and destroyed the subsistence farming and fishing-based economy of the region's Ogoni people. But it wasn't until the early 'nineties that the Ogoni started protesting against repression and exploitation by Shell and the military junta.

Between 1990 and 1995, Nigerian soldiers conducted massive, brutal raids against the Ogoni to repress the growing protest movement. Many Ogoni villages were burnt down, and prominent leaders put behind bars. Shell is said to have supported the campaign.

Ken Saro-Wiwa
The abuses against the Ogoni reached their nadir on 10 November 1995. Nine Ogoni leaders were executed by the Nigerian dictator Sani Abacha, after being falsely accused of murder and tried by a military tribunal set up especially for the purpose.

The most prominent of the 'Ogoni Nine' was Ken Saro-Wiwa (1941-1995), who had been one of the most vocal critics of Shell's operations in Nigeria. His Movement for the Survival of the Ogoni People (MOSOP) represented the Delta communities who were most affected by Shell's activities.

Saro-Wiwa's relatives allege that Shell supported Nigeria's suppression of the Ogoni as well as the persecution of their leaders. They also say Shell was worried that the protests would disrupt its operations and tarnish its image abroad, and that the company "sought to eliminate that threat, through a systematic campaign of human rights violations."

Shell denies it sought to silence Saro-Wiwa, claiming that on the contrary, that it "attempted to persuade the government to grant clemency."

US human rights lawyers have brought a series of cases to hold Shell accountable for human rights violations in Nigeria, including summary execution, crimes against humanity and torture. But it has taken years for the first of these cases to come to court.

The trial this coming week is being brought under a 1789 law, which gives non-US citizens the right to file suits in US courts for international human rights violations, regardless of where the violations took place.

The trial follows a series of similar cases against some of the world's biggest oil companies over alleged crimes in developing countries. Chevron could face up to $27 billion in liability in Ecuador for polluting the jungle, and Exxon Mobil is being sued by Indonesian villagers who say soldiers hired to guard a natural gas plant committed human rights violations.