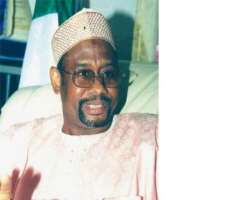 
San Francisco, June 21, (THEWILL) – A former Chairman of the National Drug Law Enforcement Agency, NDLEA, Mr. Bello Lafiaji was today convicted and sentenced alongside his former Special Assistant, Mr. Usman Amali for conspiracy and theft of about 164, 300 euros recovered from a peddler’s residence.

Justice Olusola Williams of a Lagos High Court handed Lafiaji a 16-year sentence for six out of the seven-count charges while Amali got six years on four counts but both men will spend four and three years behind bars respectively as their sentences would run concurrently.

In 2008, the Independent Corrupt Practice and Other Related Offences Commission arraigned Lafiaji and Amali for conspiracy and conversion of 164,300 euro confiscated from a drug suspect, Mr. Ikenna Onochie, in November 2005

Mr. Onochie is also being tried by the Lagos court.

While delivering judgment, Justice Williams ruled that the prosecution proved its case against the convicts beyond reasonable doubt particularly questioning why Mr. Onochie was released to return to his Maryland home by the agency after it had arrested him on October 28, 2005.

She said it was clear that 164, 300 euros was confiscated during the raid on Mr. Onochie’s home which was handed over to Amali for onward delivery to Lafiaji by Mr. Bashir Gadzama, a prosecution witness in the trial.

Justice Williams furthered added that the Lafiaji facilitated the release of Mr. Onochie after receiving the funds which was meant to have been an exhibit.

The prosecution lead by Bolaji Ayorinde called 12 witnesses including a Director of Prosecution and Legal Services, Femi Oloruntoba.