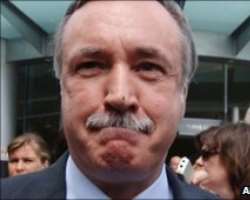 Fears are growing for the safety of several Australian mining executives whose plane has gone missing flying from Cameroon to Republic of Congo.

Nine passengers were on board, including one of Australia's richest men – mining magnate Ken Talbot.

The group set off from the Cameroonian capital Yaounde on Saturday to visit iron ore projects in Yangadou, a remote area in Congo.

Cameroon's military is leading a ground and air search over dense forest.

The plane the men were travelling on was chartered by the Australian mining company, Sundance Resources.

The area they were visiting includes the Mbalam project which straddles Cameroon and Congo – where Sundance Resources is hoping to extract 35 million tonnes of iron ore a year.

“We are seriously concerned about their safety and well-being,” AFP news agency quotes Australian Foreign Minister Stephen Smith as saying.

Sundance Resources said after it was reported that the plane had not landed on Saturday its efforts had been focussed on co-ordinating with the authorities in Cameroon, Congo and neighbouring Gabon.

“Weather conditions at site are currently favourable and a comprehensive multi-national air and ground search effort commenced at 1000 local time on Sunday,” the company said in a statement.

“All operations at site have been suspended, with all in-country resources dedicated to this search and rescue effort.”