My mum was a hustler, so am I – Jaywon 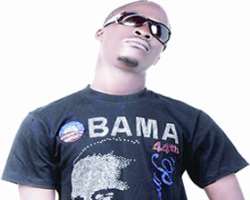 He says he had been through all the ups and downs life could throw at anyone, but survived it all and came out victorous. We can believe his success, as he has been signed on to one of the biggest record labels in Nigeria, Kennis Music. Deborah NWOKOCHA spoke with Jaywon, the young fellow who against all odds has started living his dream of being rich and famous. He talked about the hurdles of his life and how he surmounted them.

Jay won is from my name Oluwajuwonlo, but a lot of people call me Juwon, the short form of my name. Everywhere I go, people give me different names like Shigga, Holy talk, Jay boy, and so on. But at a point I was like, I need to carve a name for myself and so I used Juwon. I removed the U and had J won was what I had left.

I am from the Yoruba speaking part of Kogi state. That is where I had my primary and part of my secondary school. Then I moved to Ilorin to complete my secondary education, and later on to Niger State Polytechnic Bida, Niger state where I had my National Diploma. After my ND, I couldn't continue because at that point in my life, I needed to build a career for myself, because a lot of people were already appreciating the little stuffs I do. I was in Abuja for my IT after my ND. During that period, I was recording my own songs. But at a point, Abuja became dull. Nothing was coming in and there are a whole lot of artistes there, so I decided to come to Lagos and see; so in 2004, I came to Lagos and ever since then, I have been hustling and bustling.

It's not been good. But I always say this; the road mustn't be good when you are coming up because nothing comes easy. If it comes easy, you won't appreciate it. So you need it to be hard, you need to struggle and anything you struggle to get, you find out that you appreciate it more. It has not been easy and as a matter of fact, I don't need anybody to tell me about the industry because I think I have seen it all and I have been through it all.

I don't steal. That's why I always thank God for the kind of mother that I have. She taught us how to survive in life, because she is also a hustler. She does different kind of businesses at the same time. Again, my mother is a chronic Jehovah's Witness. Back then, you can only find me with the clothes she bought for me, the pen she bought for me, the shoes she bought for me. She checks every thing and if I bring anything that was not given to me by her home, it is trouble. Even when I was in the streets, there was no job that I couldn't do. Okay. Let me tell you one. Where I met Blackface, I was a bar man there.

I was a bagger and a motor boy in a pure water company. I was a house cleaner. I was a conductor and I also worked in an events company where I set chairs and arranged canopies for them. I actually managed it then. I was the one in charge of getting the chairs, the ice block, pile all the drinks, the canopy fixed before the reception comes.

Where I was staying was very bad o. I was staying with a security man that was securing a place, and then, I could only be there in the night. During the day, I had to go hang out somewhere. That was actually when I came to Lagos newly. There is one prayer my mum always prays; that wherever I go, I will always find help and I believe it always work. I was in Lagos out of my own stubbornness. My mum never knew I was in Lagos. When I was in Abuja, I was staying with my uncle. So when I got to Lagos, I just met with him, talked to him, told him I am an artiste, you know, I don't know, but the guy just helped.

It was in Festac going from one show to the other and doing collaborations. I had three songs with Sound Sultan before I left there. I was even supposed to be on Tuface's album, but he traveled and didn't come back on time. At that time, I had started getting a little attention in the industry because I had like two videos that are shown on T.V. One was with Tutu, W4 and Reggie. If you go on youtube, you will see them there. They are nice videos and people love them. In fact, people love them more now that they know me.

I met Kenny Ogungbe during those days of hustling. As an upcoming artiste, the hardworking ones never stay one place. You have to go to different places. You go to where there are shows. You go to the people, get some contacts and all that. One of those days, I was in Kuramo with a friend called Sleazy E. Though, back then, I had done a song with him and Konga. I was there with him, but before I performed the song with Sleazy E, I was given an opportunity by the people to perform my own song. The response from the crowd was awesome and a lot of people loved it, including Alariwo of Africa, Jeddi, Keke and D1 and they gave me their contacts and got mine too. That was how we started the whole thing.

After God and my mum, my next respect goes to Keke Ogungbe. I always advise any up coming artiste that if he sees anybody that can spend N100, 000 on his career, he should respect such person. I am not saying millions now o, because it is not easy to find somebody that believes so much in you to spend such money for you. So for Keke to spend millions on my career, I appreciate him. He is someone that I will always listen to.

I think I do music with haste. I have worked with a lot of artistes that you will have to work and work, write and write, do this, do that, record 10 times, dem never get am but me, I have not heard the beats before, I will enter the studio and deliver. I don't even write. I listen to the beats and I am like 'this is good', let me just talk before I write, when I finish, they will tell me they want it like that and that I should not edit anything. So for me, I do music with haste and it's just too easy for me, and has been selling for me. But, what I tell people is that, the most important thing is whether you love what you are doing or not. Any job you don't love, leave it and look for the one you love, because the love would give you the strength to bear every challenge.

I have paid my dues, and let me tell you, nobody paid the kind of dues I paid in this industry. The only person I respect that really paid his dues is Tuface. Apart from him, nobody paid the kind of dues I paid from the number one to number 10 artiste in Nigeria. If not for the Plantation Boiz, hip-hop might not be where it is today. The plantation boys, the Remedies and the rest of them, if they didn't sing, how we won take know say hip-hop fit sell.

It is a competition and there are a whole lot of people out there. You might win and you might not win. People thought that because I am under Kennis, I would win but that didn't happen. For me. I am a winner already. To be nominated in the Hip-Hop award is not easy. I know a whole lot of artistes that were not nominated and I just came into the industry. I even have a NMVA in my house and this one no be N50, no be small thing. That one na even Nigerian Music Video Award. Anywhere wey you carry am go, Nigeria flag dey der. I win, I no win, it is a competition and anybody can win it. I didn't even know when my category was called until I saw Terry G on stage.

It is my dream. I have always wanted to be known and seen on TV, and I always pray to God for that, even though I am not the type that prays , but when I pray, I pray hard, and also my mum's prayer. Again, I believe in myself that I know that it is just a matter of time for me to get there, and here I am, getting closer to where I am going.

My fans made me, so I always try to be careful not to do anything that would make them loose the confidence they have in me. Somebody met me and asked me to sign an autograph on her shirt. It was a white shirt and she asked me to sign it on her tummy. I was like, 'are you serious' and she said 'yes'. Another was when I was somewhere with my crew, she came into the room and was like 'are Jaywon's people around here', and they told her; that is Jaywon there, she just started screaming so hard.

Someone made a comment on my facebook wall that 'Jaywon, it's a lie, you cannot win this award, you are wack, you are a fool, you are this, you are that'. But I was so happy when I got there, because by the time I got there, I had like 50 people cursing him. At first, it was embarrassing but at the end of the day, I was so happy. My fans fought for me. Again, the whole fact still remains that everybody can't love you.