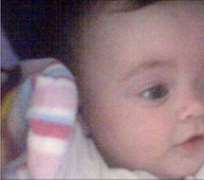 A Gloucestershire couple have pleaded guilty to two charges of cruelty to a 14-month-old baby who died from suspected methadone poisoning.

Bonny Richards, 28, the child's mother, and her partner John Davies, 32, repeatedly gave Holly Agius the heroin substitute. She died in 2009.

Manslaughter charges against Richards, of Broadwell, and Davies, of Scowles, were dropped at Bristol Crown Court.

The couple were known to social services and a review is under way.

Holly died the Gloucestershire Royal Hospital where she was taken from her home in Broadwell, near Coleford in the Forest of Dean.

Richards and Davies were bailed until sentencing on 12 July

Richard Smith QC, prosecuting, told the court that Richards and Davies had given Holly methadone on repeated occasions.

The charge of manslaughter, which they denied, was withdrawn by the prosecution. The judge, Mrs Justice Cox, ordered that the charge should lie on file.

The couple were both heavy drug-users and were known to social services at Gloucestershire County Council.

Margaret Styles, chairman of the Gloucestershire Safeguarding Children Board, said: “Because of the tragic circumstances surrounding Holly's death, we have a duty to ask whether it could have been prevented and safeguarding boards in Gloucestershire and Herefordshire are reviewing the case.

“As a result of what has happened, users are being reminded of their responsibility for looking after their children, being educated about the safe storage of drugs and that very small amounts of methadone can kill a child.

“We will also be asking whether this and other national cases indicate a dangerous culture of giving children small amounts of methadone to soothe and calm behaviour.”

Det Sgt Dave Shore-Nye, from Gloucestershire Constabulary, said the force welcomed the outcome of what had been “a very difficult investigation after Holly's tragic death”.

He added: “The Crown Prosecution Service has accepted the pleas of Richards and Davies as reflective of their actions and both will now have to live with what they did for the rest of their lives.”

The couple were bailed until sentencing on 12 July.