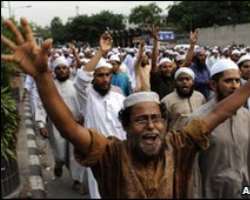 Bangladesh has unblocked Facebook after officials said the US-based website had agreed to remove caricatures of the Prophet Muhammad and “obnoxious” images of the country's leaders.

Dhaka blocked the site a week ago, angered by the content.

Last month Pakistan briefly blocked all access to Facebook in the run-up to “Everybody Draw Muhammad Day” – a contest planned by some users.

Most Muslims consider representations of Muhammad to be blasphemous.

Bangladeshi officials, apparently in response to the same issue, said Facebook had “hurt the religious sentiments of the country's majority Muslim population” by carrying “offensive images” of Muhammad.