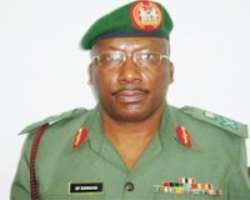 FORMER Managing Director of the Army Post Service Homes (Savings and Loans) Limited, Brig. General Felix Mohammed, has said that the General Court Martial (GCM) convened by the Chief of Army Staff, Lt. General Abdulrahman Dambazau, lacked the competence and jurisdiction to try him for alleged fraud and misappropriation of funds.

Besides, Mohammed, who is currently standing trial along with the Project Manager of PSHL, Col. Greg Edegbe, told the GCM sitting in Kaduna, through his lawyer, Mr. Adagoji Abu, that the military court did not have the powers to arraign or try him for the offence they claimed he committed.

He added that his opposition was hinged on the fact that he was no longer in service, having voluntarily retired from the Nigerian Army since September 2009.

Mohammed and Udegbe are currently standing trial before the GCM which commenced sitting on Wednesday on an 11-count charge of alleged misappropriation of funds belonging to the PSHL.

In a preliminary objection to the charges brought against the officers, Mohammed's counsel urged the military court to dismiss and strike out the charges against the applicant.

He argued that the Chief of Army staff acted ultra vires when he recalled the accused officer to the army without the approval of the Army Council for the purpose of being tried for the alleged offences long after he had voluntarily retired from service.

The counsel further expressed surprise that his client could be brought fully dressed in military uniform before the GCM for arraignment when he had since last September ceased to be a military personnel.

He stated that the Army Council had on June 9, 2009 approved the voluntary retirement of the applicant with effect from September 30, 2009 when he finally disengaged from the Nigerian Army.

Abu argued that the convening order for the commencement of Mohammed's trial dated April 6, 2010 was issued six months after the applicant retired from the Nigerian Army and had ceased to be subject to military service laws.

Mohammed's counsel, therefore, argued that by virtue of the provision of Section 1301 and 1629 of the Armed Forces Act Cap A20 Laws of the Federation of Nigeria 2004, the applicant was 'no longer triable under service laws.'

He also argued that since the powers of the General Court Martial derived from the Armed Forces Act, the court lacked the 'requisite jurisdiction' to try the applicant.

The accused's counsel therefore stated that issuance of the convening order for the GCM to commence the trial of the applicant by the Chief of Army Staff was 'illegal, wrongful, malicious, vexatious, unconstitutional and amounts to an abuse of the authority and powers of the President and Commander-in-Chief of the Armed Forces of Nigeria.'

Citing Section 25 of the Armed Forces Act 2004, he explained that only the President of the country had the powers to recall retired personnel for reserve service through the National Assembly and that all retired officers and not a single individual could be recalled for such reserve service.

Abu also stated that a case on the jurisdiction of the GCM was already before a Federal High Court in Abuja and that the COAS, the Attorney General of the Federation and the Chief of Defence Staff had already entered a defence in the matter.

'The GCM is a creation of statute and its jurisdiction cannot be extended by a mere convening order. Therefore, the GCM should decline jurisdiction and dismiss the charges against the applicant. The issue of jurisdiction is so fundamental and we must ensure that the rule of law is upheld in this case. The right thing to do is to decline the exercise of jurisdiction,' Mohammed's counsel argued.

Opposing the preliminary objection, the prosecution counsel, Brigadier General Andrew Agha-Okoro, who had earlier amended the charges, urged the court to go ahead with the arraignment and trial of the accused officers.

But the Judge-Advocate of the GCM, Brigadier General Lanre Adekagun advised the court that the issue of jurisdiction raised by the defence counsel in his preliminary objection must be thrashed out first before further proceedings could continue.

In his submission, Udegbe's counsel, Brig. General Letam Wiwa, argued that the accused officers who had been in detention in the past eight months needed enough time to study the amendment made to the charges by the prosecution counsel in the courtroom.

He argued that because the amendment made to the charges were confusing, the accused and their counsel needed to properly understand the charges before their arraignment before the GCM.

The case was adjourned for further hearing tomorrow.