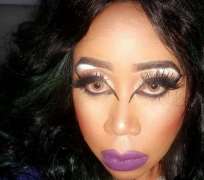 Nollywood actress, Moyo Lawal, truly derives pleasure in what she knows how to do best which is acting and she is ever ready to take up any role given to her.

Recently, the actress shared a fierce looking picture of herself having that vampire kind of look as she is set to give her role another epic interpretation.

The actress has been the toast of many producers as she has been getting lots of movie scripts which has been keeping her busy and that is because she is really worth every penny.