STEPHANIE OKEREKE SCREENS HER MOVIE “THROUGH THE GLASS” AT CANNES FESTIVAL, FRANCE 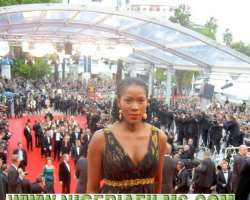 Nollywood A-list Actress Stephanie Okereke was at the Cannes festival May 12-May 23 for the screening of her movie “Through the Glass”.

This screening was made possible by the partnership between Stephanie's own production company Next Page Productions and ID communications Canada. The Movie was screened to a very diverse audience on Monday, May 17th, giving a very international promotion to the ever growing Nollywood industry and one of its goals to reach a western audience.

“I cannot begin to describe my excitement and appreciation for this industry. It's not about approval; it's about opening up the world to a different type of film making experience, the hybrid of Nollywood and Hollywood.” –Stephanie Okereke

Stephanie Okereke came into the Nollywood scene in 1997 as a student at the University of Calabar. After graduating, her thirst for an acting career propelled her into Nollywood fulltime. Stephanie made her mark with the movie Emotional Crack which premiered at the African Film festival in April 2004. With Over 90 films to her name, Stephanie Okereke is continually building her brand in the movie industry.

A recent graduate of the New York Film Academy, Stephanie has expanded her title to include Director, producer and writer with the introduction of her latest movie: Through the Glass which premiered at the Silver Screen Theatre of the Pacific Design Centre on
October 18th 2008 in Hollywood, California, and premiered across theatres in Nigeria on September 16th 2009 to record topping viewings and now at the Cannes Festival.

Through the glass is the story of Jeffrey [Garret Mckechnie] who lives the ultimate bachelor's life going through numerous non-committed relationships, but struggles to excel at work and gain his father's love and acceptance. Jeffrey's life gets even more intriguing when life deals him a card that stops him in his tracks. On a typical day, he returns from work to find a note "take care of your responsibility" left on top of a baby who is abandoned on his doorstep. In nothing short of what is scary, confusing and comedic, he turns to his Nigerian neighbor, Ada [Stephanie Okereke] who he has a secret crush on, to help him. What happens to the baby? Will Jeffrey break through the glass of his phobia for commitment and keep the baby? Will Jeffrey confess his secret crush on Ada?