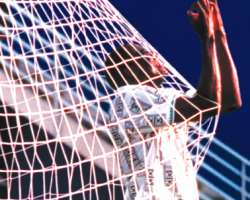 The world probably did not know what it was missing in international football before the 1994 World Cup which had Nigeria featuring for the first time in the competition. The Super Eagles, fresh from winning the Africa Cup of Nations in Tunisia in that year, went into the competition at their best. Nigeria's memorable achievements in that event has always made FIFA looked forward to seeing the Eagles at every World Cup finals. Writes Kazeem Busari

Eagles jerseys
Nigeria made an entrance into the World Cup in 1994 with their jerseys. The design was voted as the most beautiful in the tournament.

Yekini scores first goal
Nigeria scored its first ever World Cup goal against Bulgaria through Rashidi Yekini in the 1994 edition hosted by the United States. Playing against a European team for the first time at that level, the Eagles were not expected to score first. But Yekini defied the odds to score first in the 21st minute and had a weird celebration afterwards.

Siasia's goal against Argentina
After beating Bulgaria 3-0 in the first game and watching Argentina demolish Greece in an earlier match, Nigeria was not favoured against the South Americans. But the unexpected happened in the 8th minute as Samson Siasia took advantage of a lose ball and blast a shot past goalkeeper Luis Islas to record Nigeria 's only goal in the match. Argentina eventually won 2-1 but no one would forget in a hurry that they almost lost to Nigeria.

Topping Group D in style
Winning one game and losing another did not give assurance of qualifying for the knockout stages so beating Greece in the last game was a task that must be done.

Goals from Finidi George and Daniel Amokachi in the 45th and the 90th minutes placed Nigeria atop the group and confirmed a place in the second round.

Stylish celebration
Marco Tardeli may have started solo celebration at the World Cup, both Finidi and Amokachi took the act to another level after scoring against Greece in their third match. Finidi mimicked a urinating dog while Amokachi performed a disco dance step. Both acts had their places in the ranking of celebrations.

The loss to Italy
Perhaps the most memorable for Nigeria at the USA '94 was the defeat in the hands of the Italians. The Azzurri almost went out as the Eagles led by a lone goal until the dying minutes when Roberto Baggio got an equaliser to send the game into extra time. A defensive blunder by Nigeria resulted in a penalty which Baggio converted and ended the Nigerian dream of reaching the quarterfinals. The effect back home was devastating for all Nigerians.

Best FIFA ranking
Nigeria attained its best position on the FIFA rankings before the World Cup. The country was placed 5th in the world for the first time in April 1994.

Oliseh's goal stuns Spain
The Eagles did the almost impossible in their first match at France'98 as they defeated tournament favourites Spain 3-2 in Nantes on June 13. Goals from Mutiu Adepoju and Garba Lawal had cancelled out Hierro's and Raul's goal but a screamer from Sunday Oliseh sent the whole nation into wild jubilation.

Enyeama's super save
Nigeria did not do well generally at the Korea/Japan World Cup because coach Adegboye Onigbinde went with a bunch of youthful players. After losing 1-0 to Argentina and 2-1 to Sweden, Nigeria was out of the race for the second round ticket as the Eagles confronted England. The match ended 0-0 and one big moment of the encounter was the brilliant save of keeper Vincent Enyama in the tie. It was a fantastic shot by Manchester United midfielder, Paul Scholes, and Enyeama, who was making his first World appearance, dived full length to parry the ball out. It was rated as one of the most remarkable saves of the competition.