EKOIFF President and the Lagos Delegation at the Cannes Film Festival 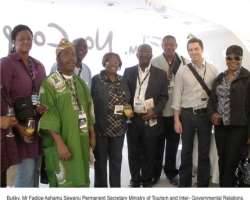 the 63rd Cannes Film Festival in France, and he shared the highlights of

their trip with Ekenyerengozi Michael Chima.
EMC: You were at the recently concluded 63rd Cannes Film Festival in

France, how was Nigeria represented this time?
Hope: The Cannes Film Festival is the world cup finals of the film world

attracting thousands of filmmakers, lovers of movies and tourists to

Cannes every May, but unlike last year Nigeria did not have a pavilion and

only few Nigerian journalists were there. The Guardian, The Nation and

EMC: You and the Lagos state delegation were at the 63rd Cannes Film

Tourism and Inter-Governmental Affairs and the Censors Board and also Mr.

and Mrs. Fashola, the amiable parents of the Governor Babatunde Raji

Fashola, SAN, were also there.
EMC: Why did the Lagos State delegation attend the Cannes Film festival?

Hope: The Lagos state delegation came to Cannes to promote the Lagos Film

City project to be located in Badagry. The Lagos Film City will be the

Hollywood of Nigeria. And we met with the top executives of KODAK at an

exclusive party on a luxury yacht where the Lagos state delegation

publicized the Lagos Film City project and I informed the international

July, which is going to become the Cannes of Africa. I had a very

of Nollywood in cinematography.
EMC: What were the major attractions at the 63rd Cannes Film Festival?

Hope: Well, Cannes will always get better with over 25, 000 film

professionals, over 5, 000 journalists and thousands of tourists thronging

of course the popular Cannes market premieres with millions of other

viewers watching on TV and Internet. As Thomas Sotinel, the Movies Section

Editor of the prestigious Le Monde said, that Cannes Film festival is

industry, attracting the gaze of the five continents. Filmmakers do not

only tell our stories, but also capture history in the making. Senegal and

touching Films was “Life, Above All", a movie on the stigma and trauma of

AIDS in South Africa. Many of the viewers left the theatre in tears after

seeing it. A filmmaker from Thailand, Apichatpong Weerasethakul won the

(Uncle Boonmee Who Can Recall His Past Lives)". But the question is;

where is Nigeria? We need to work harder to compete with the best in the

film world. I am very confident that we have all it takes in terms of

pitch in every film festival in the world. And that is why we want to use

July and attract thousands of tourists to Nigeria.
I was also interviewed on the inaugural Eko International Film Festival by

our media partners on EKOIFF which is already attracting filmmakers and

movie buffs from all over the world.
EMC: How many films have been submitted for EKOIFF?

Hope: We have received over 33 films so far and 21 of them are by

filmmakers from Europe and other parts of the world, including a Spanish

film that has won over 100 awards, and one film called “Made in Japan”. We

Hope: We are doing our best with able members of the Organizing Committee

and our European media partners who have publicized Eko International Film

this is the host state, the Federal Government, the local and

Nigerian filmmakers and others should go to our website for accreditation,

because only accredited film practitioners and journalists will be given

free pass. Others will buy tickets to see the movies at the venue. Over

no show like show business and this is Eko for show. We are ready to make

it happen for the entertainment of all lovers of movies.