GORILLAZ REPLACE U2 AT GLASTONBURY 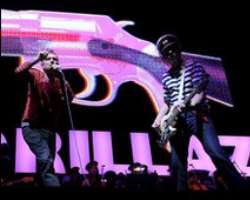 Damon Albarn's virtual pop band Gorillaz are to replace U2 at the Glastonbury Festival next month.

The announcement comes a day after the Irish band were forced to pull out following Bono's back surgery.

In their only full UK festival appearance, Gorillaz will top the bill on 25 June. Albarn also headlined the event last year with Blur.

Mr Eavis added: “I'm very excited about Gorillaz' show coming here because they're so open to guests and collaborations. Gorillaz will come to life on that stage but we wish Bono all the best

Damon Albarn
“The alchemy of Friday's show is going to be astonishing – a perfect, contemporary way to kick off the 40th anniversary celebrations.”

Albarn said it was “a terrible thing for U2, Glastonbury is magical”, adding: “Gorillaz will come to life on that stage but we wish Bono all the best.”

The cartoon group released their third album Plastic Beach in March and unveiled their new live show at the Coachella festival in California in April.

Gorillaz co-founder Jamie Hewlett said: “I wasn't sure how Gorillaz would work in a festival environment, but Coachella was amazing. I think Glastonbury will be an unbelievable experience for us.”

They will also visit other European festivals including Denmark's Roskilde on 1 July and Benicassim in Spain on 18 July.

U2 were forced to withdraw from Glastonbury and their US tour after after Bono had emergency surgery to save him from possible paralysis.

'Severe pain'
Neurosurgeon Professor Joerg Tonn said: “The surgery was the only course of treatment for full recovery and to avoid further paralysis.”

Prof Tonn told the Reuters news agency Bono had been “in severe pain with partial paralysis of the lower leg”.

In 2005, Kylie Minogue withdrew following her diagnosis with breast cancer. Basement Jaxx were promoted to take the main slot.