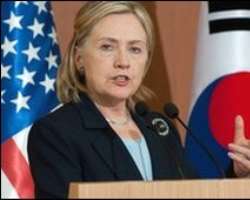 Mrs Clinton pledged US support
US Secretary of State Hillary Clinton says the international community must respond in the growing crisis over the sinking of a South Korean warship.

She said there was “overwhelming” evidence that North Korea was to blame, and urged Pyongyang to halt its “policy of belligerence”.

Mrs Clinton was speaking in South Korea at the end of an Asian tour.

North Korea denies it was responsible, and has warned of retaliation if action is taken against it.

After an international investigation produced proof that the ship, the Cheonan, was hit by a North Korean torpedo, South Korea announced a package of measures, including a halt to most trade. It is also seeking action via the United Nations Security Council.

The North then announced, late on Tuesday, that it was cutting all ties with the South. It has also banned South Korean ships and planes from its territory.

South Korean Foreign Minister Yu Myung-Hwan told a joint news conference he and Mrs Clinton had agreed that North Korea should take responsibility for the sinking of the Cheonan, torpedoed on 26 March with the loss of 46 lives.

“This was an unacceptable provocation by North Korea and the international community has a responsibility and a duty to respond,” Mrs Clinton said.

Continue reading the main story
North Korea has a record in calculated risk. This crisis might be another example of that

Before going to Seoul, Mrs Clinton had two days of discussions in Beijing with her Chinese counterparts.

She has been pressing China to join the international condemnation but Beijing is taking a cautious line, calling for restraint.

“I believe that the Chinese understand the seriousness of this issue and are willing to listen to the concerns expressed by both South Korea and the United States,” Mrs Clinton said on Wednesday.

“We expect to be working with China as we move forward in fashioning a response.”

Chinese Vice-Foreign Minister Zhang Zhijun earlier said his country was still evaluating information on the sinking of the Cheonan.

“We have always believed that dialogue is better than confrontation,” he added.

Tank exercises
With tensions rising rapidly, the North has reacted angrily to trade and shipping sanctions announced by the South.

May 25: North Korea announces it is severing all ties with South

Korean propaganda fight
It said on Wednesday it would cut off a road link across the heavily defended border if Seoul resumed propaganda broadcasts, halted six years ago.

Earlier, the North said it would match Southern sanctions with its own, and sever the few remaining lines of communication between the two governments.

South Korean ships and planes would be banned from Northern territorial waters and airspace.

All South Korean workers in the jointly run Kaesong industrial park north of the border were expected to be expelled although they were allowed to enter on Wednesday, Reuters news agency reports.

Apart from Kaesong, there is little economic relationship left between the two states, their ties almost frozen since Lee Myung-bak took office in 2008, the agency notes.

“North Korea is not closing up Kaesong immediately because it is saving the cards it needs in order to play the game,” said Jang Cheol-hyeon, a researcher at the Institute for National Security Strategy.

The two states are technically still at war after the Korean conflict ended without a peace treaty in 1953.

South Korean K1 tanks could be seen on Tuesday conducting an exercise to prepare for a possible surprise attack by North Korea.