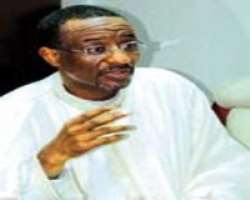 SHARES of money deposit banks in the country remain banned for use as collateral for trading in margin credit in the country, according to the new rules on margin trading released by the Financial Services Regulation Co-ordinating Committee (FSRCC), which met last week.

Margin trading is the practice where operators borrow money from banks to buy shares in the capital market with the prospect of earning good returns when the value of the shares appreciate in the market.

However, the banks' securities can be used as collateral for any other transaction, other than for margin trading.

A statement yesterday by the Head of Corporate Affairs of the Central Bank of Nigeria (CBN), Mr. Mohammed M. Abdullahi explained that the new rules adopted were aimed at averting a repeat of the sharp practices that bedeviled margin trading in the run-up to the capital market collapse.

He said the committee noted the fact that most operators that suffered losses in margin trading lacked the capacity, technology and framework to embark on margin trading, factors that contributed immensely to the fate they suffered and the spiral effect during the financial market meltdown.

Consequently, the FSRCC in its determination to curb the abuses in margin trading has decided as follows: ' That banks aggregate exposure to margin lending shall not exceed 10 per cent of total loans and advances. However, banks are advised to be more prudent by adopting lower exposure limits. Banks with exposures in excess of the 10 per cent limit are required to submit to the CBN clear plan of how they intend to wind down their exposure in compliance with the prudential limit.

'That bank shares shall not be used in margin trading. For the

avoidance of doubt and clarification, the shares of banks would

continue to be used as collateral for bank lending. Thus, the

restriction placed on bank shares are only in respect of margin

place adequate technology and expertise that will facilitate on-line

and are to observe at all times a maintenance margin limit of 120 per cent.

They are equally expected to put in place robust framework for

margin trading, which should include definition of margin and

internal rules and procedure for trading, consistent with regulatory

All operators interested in margin trading are to apply to the

purview of the CBN, are to apply to the CBN for such recertification.

compliance is expected on or before September 1, 2010.'