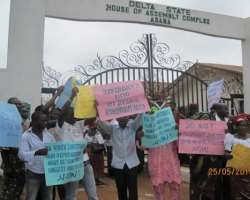 An Abuja Appeal court had on Wednesday 12, May, 2010 sacked the Speaker, Mr. Martins Okonta declaring that he was not the duly sponsored candidate of the Peoples Democratic Party (PDP) in the 2007 State House of Assembly elections in the state.

Mr. Kingsley had dragged the embattled Speaker representing Ika South constituency to court challenging his candidature in the 2007 state House of Assembly election.

The protesters who stormed the Assembly premises with over 20 buses barricaded the main entrance to the complex making it difficult for staff and other visitors to gain entry into the compound.

The placards carrying protesters with various inscriptions like, "Okonta has been defeated don’t support him against the people"; "Do not subvert justice swear in Kingsley Nonye Phillips now"; It's the right of the people of Ika south to be represented, don’t deny them their rights; and Obey the rule of law, Governor Uduaghan swear in our candidate" amongst others stressed that the Independent National Electoral Commission (INEC) complied with the court order with immediate effect and wondered why the House has refused to swear in their rightful representative.

According to the protesters, Mr. Okonta has been in the House since 2003 and has done three out of the four years of a term which does not belong to him since 2007, adding that justice demands that Mr. Kingsley should be sworn in immediately.

The visibly angry protesters stated that when Mr. Phillips visited the Assembly last week over his swearing in, he was told by the clerk of the House, Mr. Raymond Yavbieri that he could not do anything about his swearing in because he (Clerk) has not received any directive from the state governor, Dr. Emmanuel Uduaghan.

"On 18th May, 2010, Martins Okonta addressed the House of Assembly and told the World that he has stepped aside and relinquishing the position of the speaker. Since that date, the House has been sitting but Martins Okonta has not been attending the sitting, which he cannot legally do because of the judgment of the court. Now it is clear that if Mr. Kingsley Nonye Phillips, is not immediately sworn in, our constituency will not be represented in the House of Assembly which is not only injustice to Mr. Kingsley Nonye Phillips but also to the entire people of Ika South constituency of Delta state. We the people of Ika South constituency demand justice and we must see justice done in this case," the protesters insisted.

They appealed to the state governor, Dr. Uduaghan to direct the House to respect the rule of law and order the immediate swearing in of their son and representative, Mr. Kingsley.

In a letter by the Ika Freedom Group, addressed to the Deputy Speaker of the House and signed by the chairman, Mr. Anthony Igbedion and its Secretary, Mr. Osawaru Eghosa Lynn, it stated that, "We are the aggrieved indigenes of Ika South Local Government Area. We are aggrieved because the democracy we all fought for is losing it shape, we can't watch helplessly while some group of greedy and selfish men swindle us of our right, Hon. Kingsley Nonye Phillips was our candidate PDP flag bearer in 2007 polls, he was unjustly striped of this crown and his mandate given to an alien who was unduly imposed on us to represent in the interest of his caucus and his god fathers while our tongues were tied against our will.

We could have adopted several means, including violence as a means of exhibiting our grievances, but this will only be a cog in the wheel of our nascent democracy, we therefore exhausted all legal remedies at our disposal and thanks to the judiciary. The federal high court of Appeal on May 12th 2010 sacked Mr. Martins Okonta and ordered that our mandate, Mr. Kingsley Philip Nonye be sworn in but up till now, our son is yet be sworn in."

Addressing the protesters, Acting Speaker of the House, Mr. Basil Ganagana, said the House received both the certificate of returns given to Mr. Kingsley by INEC and at the same time stay of execution issued by a Court from Mr. Okonta which he said the House has directed its legal department to consult with the Attorney General and Commissioner for Justice for necessary advice.

"The demonstration is a beauty of democracy and the Assembly is an institution bound by the right of those they represent. We are going to follow due process and rule of law and will not falsify the destiny of anybody."

Corroborating Ganagana, Hon. Emeyese Akporigaga, Majority Leader, added that though the two papers were served the House this morning, he maintained that the House would not be stampeded by anybody in the process of doing the right thing.

Mr. Okonta had last week announced his resignation and vacated his seat as the speaker. He said he would concentrate on completing his Doctoral Degree course in Law. His deputy, Mr. Basil Ganagana now presides over Assembly sessions.