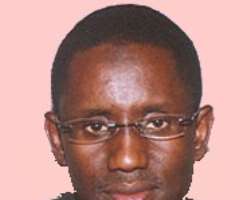 Nuhu Ribadu
About two years after it stripped former anti-corruption czar, Nuhu Ribadu, of his police rank and dismissed him from service, the Police Service Commission, PSC, the agency with authority for employment, discipline, and posting of senior officers reversed itself yesterday.

In a letter dated 24 May 2010 and addressed to the Inspector General of Police, the PSC said Mr. Ribadu has been reabsorbed into the police in his full ranks of Assistant Inspector General, AIG, with effect from December 2008, adding however that he would immediately proceed on retirement from the police.

Rank Stripping
In a July 2008 move, the PSC stripped 140 officers including Mr. Ribadu of their ranks claiming they earned undue promotion under the Obasanjo administration. Mr. Ribadu headed to court to challenge the move prompting the police authorities to fire him for insubordination in December of that year.

The police claimed he breached official process by going to court without official clearance as stipulated by the Police Act.

Mr. Bello held that, by coming to court without the express permission from the police authority, Mr. Ribadu only exercised his discretionary right, as the provision does not make it mandatory for him to get the approval of his employers before seeking redress in a court of law.

The PSC letter reabsorbing Mr. Ribadu letter, signed by the permanent secretary of the agency, did not give reasons for the volte face but NEXT sources in the police reasoned that it was a result of an awareness in police circles that the December 2008 punitive measures lacked merit, amounted to a persecution, and was anyway going to fail in the current legal battle.

Conspiracy Against Ribadu
Sources at the Force headquarters told NEXT in Abuja that the news came with shock and anxiety for many in the velvet rank of the police who were thought to have orchestrated Mr. Ribadu's exit in what was generally thought to be a malicious power play.

PSC Chairman, Parry Osayande, announced the demotion of Mr. Ribadu while the current Inspector General of Police, Ogbona Onovo, headed a disciplinary committee set up to try Mr. Ribadu. He never appeared before the committee because he had challenged the police in court.

This was later used against him in the PSC's definition of insubordination.

With the restoration of Ribadu as an AIG, the former anti-corruption Czar is now entitled to pension and would receive all his entitlements and outstanding allowances due him as the period he was out of office.

Asset Declaration Case
Early this month, the federal government discontinued the trial of Mr. Ribadu at the Code of Conduct Tribunal where he was facing charges for not declaring his assets while he was the chairman of the anti-corruption agency.

Ribadu, accusing him of failing to declare his assets while he was the EFCC chairman. Mr. Ribadu, who has always denied the allegations, told journalists that his asset declaration forms were, "submitted on assumption of office in March 2003, and my exit from office in December 2008.

"I assert that there is no substance to this case; that my assets were declared. How could I have been confirmed for my position in 2003 if I did not submit an asset declaration form to the Senate, as all officers needing Senate confirmation are obligated to do?" he asked. He said the charges were trumped up basically to smear his name and persecute him because he had crossed some influential people while in office.

Cleared from Watch-List
Last week the Nigeria's office of the International Police (INTERPOL), formally notified security and immigration agencies that Mr Ribadu has been removed from its security watch list, following the withdrawal of the charges against him by the Nigerian government.

"I refer to the watch-listing of the above named person watch-listed for some specific acts. The charges against him have been withdrawn. The watch-listing has accordingly been cancelled," Mr. Nwodibo Ekechukwu, the Interpol anchor man, said in the notice.

Doctorate Degree
Meanwhile, the Babcock University in Ogun State has chosen Mr Ribadu as a recipient of its honorary doctorate degree in law [Doctor of Laws (Honoris Causa]. The formal ceremony for the award is scheduled for the University's convocation ceremony to be held in Ilishan, Ogun on

June 6, 2010.
In a letter sent to Mr. Ribadu by the President and Vice Chancellor of the University, Kayode Makinde, the university said the award was in recognition of Mr Ribadu's "loyal breeding", "lofty aim" and "resolute courage" as well as what it called his, "fierce stance against corruption in the face of sponsored disgrace and certain death that has resulted into positive changes and global acclaim hitherto considered impossible"

Mr. Ribadu, was removed from the Economic and Financial Crimes Commission (EFCC) which he headed from 2003 to 2007, under controversial circumstances, escaped from the country and was declared wanted by the Nigeria police on November 20, 2009, after being accused of not declaring his assets as the chairman of the ant-graft agency.

Returning Soon
Presidency sources said at the weekend that Mr. Ribadu is expected to resume "in a matter of weeks" in Abuja. As part of his remit, Mr. Ribadu will be the presidential anchorman supervising the broad anti-corruption platform of the country which includes his former agency, the EFCC; the ICPC; the Code of Conduct Bureau and other related agencies.

Mr. Ribadu is, at the moment, winding up a plum fellowship at the Centre for Global Development (CGD), a think tank in Washington D.C. dedicated to international issues of development.