NEW ERA OF POLITICS IN KADUNA 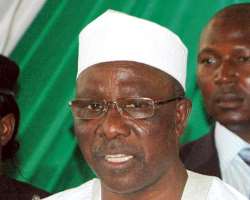 Sixty-two-year-old Christian from Southern Kaduna, Patrick Yakowa, has been sworn-in as the Governor, prompting SEGUN OLATUNJI to write that the political equation in Kaduna State may not be the same again.

Before last week's nomination of former Kaduna State governor, Alhaji Namadi Sambo, by President Goodluck Jonathan as the vice president, the people of Southern Kaduna had thought that they would have to wait till 2015 before they could renew their age-long agitation for one of their own to become the governor of the state.

Due to their experience regarding the politics of the state, they believed that realising such a dream was far-fetched.

In fact, the closest the mainly Christian Southern Kaduna people had got to realising the dream of having one of their kinsmen to occupy the Sir Kashim Ibrahim Government House was during the governorship primary election in 2007 when Senator Isaiah Balat put up a very impressive run.

Balat gave Sambo, who eventually emerged the candidate of the Peoples Democratic Party a good fight and was only defeated in the second round of the primary.

Earlier, the Southern Kaduna people in the run-up to the primary had been banking on an agreement said to have been reached with the then governor, Ahmed Makarfi, to the effect that he would be succeeded by one of their own. But when the chips were down, Makarfi allegedly backed down and was said to have prevailed on Balat to drop his ambition.

Aggrieved by the development, it was not surprising that forces from that part of the state regrouped as soon as Sambo was sworn-in in 2007. They used every available opportunity to draw attention to the political marginalisation of the zone.

In no time, the Southern Kaduna and the Sambo-led administration were on a collision course, especially over the sharing of political offices among the various groups in the state.

While the dust raised over the nomination of persons to fill Kaduna State's slots in the then President Umaru Yar'Adua's cabinet and the appointment of commissioners into Sambo-led State Executive Council was yet to settle, another crisis erupted regarding the membership of the 23 councils' Transitional Management Committees.

Tension heightened so much that many expressed fears that the relative peace existing in the state since the bloody 2000 ethno-religious crisis and the 2003 anti-Miss World pageant riots might soon be shattered, if utmost care was not taken in handling the matter.

The youth wing of the Christian Association of Nigeria in the state and the Southern Kaduna Youth Vanguard were vehement in their criticisms over the matter.

Specifically, the YOUTHCAN criticised Sambo for alleged marginalisation of Christians in the state, particularly those from Southern Kaduna. The YOUTHCAN also chided the governor for alleged lopsidedness of his appointments, especially in the membership of the councils' TMC, warning that attempts by Sambo to relegate Christians to the background while his tenure lasted would amount to a political suicide.

The body stated its anger in a statement jointly signed by its Chairman, Diji Obadiah Haruna and Secretary, Pastor Stephen Mailafiya.

Sambo had forwarded a list containing 115 names to the Kaduna State House of Assembly for approval as TMC chairmen and councillors for the 23 LGAs. The approval of the list by the Assembly at an emergency session sparked off spontaneous reactions from Christians in the state, who argued that a situation whereby only five out of the 115 members were Christians was unjust and unacceptable.

They stressed that any government attempting to shy away from the ethnic and religious divides existing in the state would only be courting trouble.

Specifically, the YOUTHCAN in its four-page statement entitled, 'Bending the wheel of Progress in Kaduna State Through Unfair Appointment of Local Government Caretaker Committees' accused the government of deliberate attempt to take the volatile state back to the dark days when the sensibilities of a segment were abused.

The Southern Kaduna Youth Vanguard in the same vein queried the alleged appointment of non-indigenes into positions that should have been reserved specifically for the people of the zone, accusing the governor of having 'taken the peaceful co-existence in the state in the last five years for granted by making such glaring lopsided appointments.'

SOKAYOV president, Mr. Mordecai Ibrahim, and secretary, Aaron Daniel, said then that it had 'followed keenly all the appointments so far made by Governor Namadi Sambo since he assumed office. SOKAYOV is truly sad and amazed that notwithstanding the massive votes the people of Southern Kaduna gave Sambo in the April 2007 governorship election as against what he got from zones one and two, he is already discriminating against our people.'

In his reaction, the then Director General (Media and Public Affairs) to the governor, Mallam Umar Sani, told our correspondent that the utterances and emotional outbursts of the two Southern Kaduna bodies were the handiwork of some mischief makers who should not be taken seriously.

Apparently reacting to the allegations of complicity levelled against him by his kinsmen, the then Kaduna State Deputy Governor, Mr. Patrick Yakowa, joined in the fray, stating that claims by the Southern Kaduna youth groups that the government was not fair in appointments to public offices, should be discounted as mere propaganda and exuberance.

Yakowa had argued that the claims of the groups were baseless as the selection of the commissioners and members of the TMC were transparent and consultative, stressing that the consent of the various stakeholders in the southern part of the state, including himself, Senator Caleb Zagi representing the Kaduna South Senatorial District in the Senate and the then Secretary to the State Government, Mr. Felix Hassan Hyat, was sought before the selections were made.

Yakowa had appealed to his
kinsmen to give the government
the needed support to enable it
excel in a peaceful and
harmonious atmosphere. But his explanation seemed not to have satisfied his people who could still not understand why one of their own could not call the shots from the Sir Kashim Ibrahim Government House since the creation of the state.

The cat and mouse relationship existing between the Southern Kaduna and the Sambo administration got to a head last December when at a news conference, Yakowa told his kinsmen in clear terms the futility of their agitation for one of their own to occupy the governorship in the nearest future, urging them instead, to back Sambo's second term ambition. Being an insider in the politics of the state, the new governor, had said, that doing so would help the zone in securing Sambo's support to produce the governor in 2015.

Our correspondent gathered that still smarting from the feeling of being marginalised, the people of the area, before last week's nomination of Sambo as the vice president, were already planning to align with other forces opposed to him in the state PDP to work against Sambo's return to the Government House in 2011.

But it has been jubilation galore for the people of Southern Kaduna since Sambo was nominated and subsequently confirmed by the National Assembly as the vice president of Nigeria.

The inevitable phenomenon-death- seems poised to change the political permutations in the state. In fact, it has now made it possible for the people of Southern Kaduna to realise their age-long dream of having one of their kinsmen exercising real political power in the state earlier than they had thought. And from now on, the political equation in the state may not be the same again with the swearing-in of Yakowa, a Christian from Southern Kaduna, as the Governor.

It is interesting to note that death had on two occasions paved the way for Yakowa to move higher in his political career. The first was when the former deputy governor of the state and his kinsman, Stephen Shekari, suddenly passed on in 2005 in Israel where he had undergone surgery. Yakowa, who was then the Secretary to the Kaduna State Government replaced him. Also, the death of President Umaru Yar'Adua which necessitated Sambo's elevation to the vice presidency has given Yakowa the opportunity to succeed his boss as the governor of Kaduna State.

SOKAYOV president, Ibrahim, said the events surrounding the nomination of Sambo as vice president were answers to the long time prayers of the people of the region. Ibrahim said that Yakowa was capable of taking the state to greater heights by continuing with Sambo's programmes.

He said, 'It is marvellous that God in his infinite mercy has paved the way for a Southern Kaduna son to eventually become the governor of Kaduna State. It shows that the prayers of the masses are often answered.'

The new governor is a former federal permanent secretary and minister. He was born in 1948 in Fadan Kagoma, Jema'a Local Government Area of Kaduna State. He holds a master's degree in Public Administration from the Ahmadu Bello University, Zaria.

Already, the race for the deputy governorship has intensified. By the political arrangement in the state, a Muslim is expected to become Yakowa's deputy. And in the forefront of this race is the former Executive Secretary of the Petroleum Technology Development Fund, Alhaji Yusuf Hamisu Abubakar; who is said to be highly favoured by the power brokers in the state.

Abubakar, popularly known as 'Mairago' because of his generosity had before now been positioning himself for a seat in the Senate in 2011. Also said to be in the race is another former executive secretary of the PTDF, Alhaji Hussein Jallo.

He was a political adviser to Sambo. Names of the current information commissioner in the state, Alhaji Saidu Adamu, that of the former Commissioner for Agriculture, Lawal Samaila Yakawada; and the recently sacked Group Managing Director of the Nigerian National Petroleum Corporation, Ladan Shehu, are also being touted for the position.