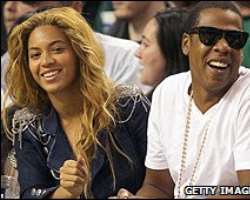 Beyonce and Jay-Z have amassed nine nominations between them

Rapper Jay-Z leads the nominations for the Black Entertainment TV (BET) awards with five nods, while his wife Beyonce has picked up four.

There was also recognition for teenage Canadian star Justin Bieber, who is in the running for best new artist.

“Justin Bieber has crossed the colour boundaries in the way hip-hop has the other way for a number of years,” organisers said.

Winners will be honoured at an awards ceremony in Los Angeles on 27 June.

'Rhythm'
Jay-Z is in the running for best male hip-hop artist and two nods in the best video category.

Justin Bieber has gained a strong following
Beyonce is tied with other artists who have gained four nominations, including Alicia Keys and Melanie Fiona.

The Canadian will go head-to-head with compatriot Bieber in the best new artist category.

Stephen Hill, BET's head of programming, praised the teen singer for the “rhythm in his music”.

“He makes the type of music our audience likes,” added Mr Hill, whose network primarily caters for African-American audiences in the US.

Bieber shot to fame after his mother posted videos of him performing on YouTube, and his debut album went to number one in the US album chart.

He was signed to a record label with the help of R&B star Usher, who also picked up an awards nomination.