ETHIOPIAN POLLS RESULTS OUT IN 48 HOURS 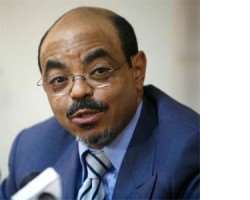 A PROVISIONAL winner of the Ethiopian federal parliamentary elections, scheduled for Saturday, could be declared as early as within 48 hours after polling stations are closed, a senior government official in the country has said.

In the run-up to the election, a number of political parties have vowed they are going to win. These include the ruling Ethiopian Peoples' Revolutionary Democratic Front (EPRDF), which is running for a fourth five-year term, and a number of other parties, including the Forum for Justice and Democratic Dialogue (FJDD) or Medrek, which is a coalition of eight opposition groups which are fielding the second largest number of candidates for the 547 seats after the EPRDF.

The Guardian learnt yesterday that a record 32 million voters, two million more than initially forecast, are expected to cast their ballots on Saturday.

The original schedule set by the National Electoral Board of Ethiopia (NEBE) stated that constituency level results would be published a day after the election on May 24. Provisional announcements should come between June 2 and June 14, while the electoral commission is scheduled to approve and declare winner on June 21.

However, according to the Minister at the Government Communication Affairs Office, Bereket Simon, the electoral board is considering some of the dates.

'There were suggestions, including from foreigners, that the announcement of elections results, which previously took 20 to 30 days, is a bit long. Given phone services are widely available across the country now, including in 14-15 kebeles, as well as other communication means, provisional results on national level could be declared as early as two, three days after the polling day', Bereket said.

The minister explained that ward level results could be added within a day and transmitted to the zonal and later to regional level before reaching the NEBE's headquarters in Addis Ababa in less than 72 hours.

In the disputed Ethiopian national election of 2005, during which post-polling violence reportedly claimed over 200 lives, political parties, including the ruling EPRDF, claimed victory before the electoral board officially announced the results.

It was generally believed that the premature claims incited some of the protesters who clashed with security forces. Various legislative changes have been made to the Ethiopian election law, including prohibiting anybody from speculating on the official result before NEBE announces it.

A code of conduct for political parties was also adopted from the International Institute for Democracy and Electoral Assistance, a Swedish-based inter-governmental organisation that supports sustainable democracy worldwide. The code was made to be part of electoral law after being approved by the Parliament.

The EPRDF, together with the two survivors of the former opposition coalition that performed strongly in the 2005 election - Ethiopian Democratic Party and All Ethiopian Unity Party - jointly endorsed the code.

The government said the code, aided by campaign subsidies for all parties for the first time in Ethiopia's electoral history and the 31 million birr (about N333 million) airtime given to parties to campaign, have created a conducive environment for fairly competitive elections.

However, it was learnt that opposition groups argue that the criteria devised for dividing the subsidies and the airtime in the state-owned media favours the incumbent.