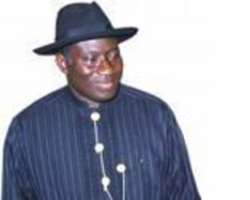 PRESIDENT Goodluck Jonathan has declared a result-oriented anti-corruption crusade, acceptable electoral reform and stable power supply as the irreducible minimum factors for gauging the performance of his administration

He said the ongoing anti-corruption crusade would be vigorously pursued to ensure that all leaders linked with financial misconduct and other forms of abuse of office are brought to book.

Jonathan, who stated this yesterday assured that his administration would deliver on electoral reform, explaining that all winners in the 2011 general elections at all levels of government would emerge from a honest and transparent electoral process.

He said only free and fair elections would enable such leaders to exercise legitimate authority over the people, adding that 'every valid vote of the electorate will count in the 2011 elections.'

Jonathan stated this during the opening session of the ongoing regional conference of Commonwealth Association for Public Administration and Management (CAPAM) in Abuja.

And if the achievement of credible elections would reshape the polity, elected representatives and other political office holders must not after election be allowed to change their political parties without first resigning and getting fresh mandate on the basis of their new platforms, former Secretary-General of the Commonwealth, Chief Emeka Anyaoku, has said.

Anyaoku, a founding member of CAPAM, who also spoke at the event, appealed to the National Assembly now reviewing the Electoral Act and the nation's constitution not to allow political party holders move around aimlessly.

Jonathan said because the entire world expects credible elections from Nigeria, his administration was determined to ensure that the votes of the people count in the 2011 polls.

'Let me assure you that we shall neither fail our nation nor our admirers all over the world who are counting on us to make a significant difference. Another area of challenge that we are currently addressing is inadequacy of critical infrastructure, the most compelling being epileptic power supply. This is important to stimulate economic growth, ensure poverty reduction and employment generation as well as enhance competitiveness. The third priority concern is anti-corruption, based on the existing policy of zero tolerance for corruption to ensure that all offenders are appropriately sanctioned within the ambit of the rule of law and observance of due process.

'The Commonwealth has contributed immensely to the attainment of global peace and harmony through the untiring efforts of several key players, including Commonwealth Heads of Government. It has always been guided by certain fundamental values, principles and norms, which have evolved over the years. These enduring values and principles have reaffirmed subsequently through a number of declarations by Commonwealth Heads of Government. There was a renewed commitment to participatory democracy, characterised by free and fair elections, representative legislative, an independent judiciary, a well-trained public service, a transparent and an accountable public accounts system,' he said.

The President said the appropriateness of the theme of this conference, 'Good governance, accountability and trust' is apt because it seeks to create a veritable platform for engaging with leaders at the political, bureaucratic and technocratic spheres in order to reawaken them to their responsibility in taking their nations forward to higher realm of socio-economic transformation. It is universally acknowledged that without good governance there can be neither accountability nor trust. Indeed, government has been described as a trust committed by all. There can be no good government without good public sector institutions with a critical mass of public servants who are irrevocably committed to the promotion of the common good.”

The Head of the Service of the Federation (HOSF), Mr. Stephen Oronsaye said efforts had been intensified to regain the trust the citizenry had in their leaders, particularly the political class.

He said the public service must therefore mobilise the required policy intelligence to ensure that it earns the trust of the people and help the state to record quick wins in the war against poverty and disease, despite the worrying prognosis by the International Monetary Fund (IMF) and the World Bank that Africa's chances of achieving the Millennium Development Goals (MDGs) are bleak.

To Anyaoku, those who represent Nigerians in the National Assembly, state assemblies and local councils as well as political office holders at the three tiers of government must be freely, fairly and credibly elected by the electorate.

'We are now looking at the President to see that the leading personnel of the Independent National Electoral Commission (INEC), especially the chairman and commissioners are people of acknowledged integrity and non-political partnership, who can ensure that the entire electoral process including, in particular the compilation and timely display of the electoral register, and the logistic arrangement for voting, are transparent and correctly effected.

'There is the challenge of tackling corruption and its pervasive effect on all the institutions and instruments of governance, and reducing the role of money in our electoral process, elections should not be for only the super rich.

'There should be reasonable limits to the financial contributions to and deposits by candidates as well as how much they can spend on electoral campaigns,' he said.

Anyaoku, who stressed the role of political leaders in public policy formulation, said it is the responsibility of the civil service 'to execute such policies with efficiency, and to do so with high moral fibre.'

He asserted that the civil service remains an inextricable and indispensable part of the government, adding that because it plays a very critical role in the state, its disposition should go beyond technical competence, effectiveness, and efficiency.

The disposition of the civil service, according to Anyaoku, must include moral competence and humility. 'In the early years of Nigeria' independence, the country could boast of a federal civil service that compared well with the civil service in any part of the world.

'Today, the Nigerian civil service has lost not only its earlier attributes of competence and efficiency, but also the tradition of your obedient servant which used to be how letters from members of the civil service were concluded. Our civil service while attending to the citizens seems now to manifest the attitude of doing them a favour.'