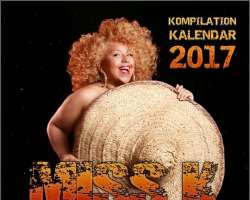 2017 seems to have started in a good light for curvaceous Afro-Caribbean & Spanish Artiste, Model, Brand Ambassador and Humanitarian, Miss-K, when she unleashed astonishing photos for the New Year.

The amazing cover page picture, was done especially for her “Kalendar 2017” cover page, which she shoots yearly and debuted last week.

If there's one thing Miss-K is great at, it's getting her picture taken. She even nails it when it's not a selfie and she's not the one holding the camera.

How does she do it? It is a mystery beyond comprehension. She is a photogenic wizard.

She may have been in hide out from the media since her last trip toUganda, in April 2016, where she shot a fashion add campaign for African Image Creators, but that doesn't mean Miss-K was feeling modest when she dared to bare her famous curves with nothing else covering her but a giant hat, before the lenses of photographer to the Stars, B.Would, who also previously worked with a number of Nigerian Artist such as D’banj, JJC and M.I to just name a few.

Mind you, the giant straw hat wasn’t just any hat. It was a hat specially customized and woven for her, by a Nigerian fisherman’s wife, from the Makoko village in Lagos, in addition she also wore some sexy Ankara high heels made by Nigerian Ankara footwear producer, Mfon Abasi, for the Jacey collections.

The Fashionista, once again, strides into the flagship of her African heritage, by wearing accessories made in Africa by Africans, as she loves to help promote young and up-coming African designers, finding them so talented.

The cover is a success, which has been appreciated by several celebrities, including Hollywood Actor and Movie Director Chrystee Pharris who is known for screening in famous American sitcom “Scrubs”.