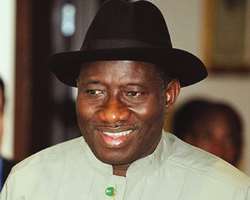 President Goodluck Jonathan on Monday ordered a comprehensive audit of the accounts of the Nigerian National Petroleum Corporation.

Jonathan, who also appointed Mr. Austin Oniwon as the new Group Managing Director of the corporation, directed the Minister of Finance, Dr. Segun Aganga, to hire a world class audit firm to carry out the exercise.

These were contained in a statement which also made public some changes in the administrative structure of the Presidential Villa.

Although no reasons were given for the pending probe of the NNPC, a top source in the Presidency said the Jonathan administration was determined to block all the loopholes through which Nigeria lost millions of dollars through graft and contract inflation.

The auditing of the corporation's accounts is one of the conditions given by the unions to accept deregulation of the downstream sub-sector of the oil industry.

The National Assembly, had also at different times, tried to probe the corporation's expenditures.

Oniwon, an indigene of Kogi, State was until his new appointment the Group Executive Director(Refining and Petrol Chemicals) of the NNPC. He replaces Alhaji Shehu Ladan, who was on April 6, 2010 appointed the NNPC GMD by Jonathan.

It was learnt that Ladan's exit was negotiated as he might become the new Deputy Governor of Kaduna State.

The statement by Mr. Ima Niboro, who was elevated from Special Assistant to Special Adviser to the President on Media and Publicity on Monday reads in part, 'The President has directed a comprehensive audit of the NNPC accounts. The Minister of Finance, Dr. Aganga, is to engage the services of a world class auditing firm to carry out the audit.

'In a related development, Mr. Austin Oniwon has been appointed Group Managing Director of the Nigerian National Petroleum Corporation, NNPC. Oniwon who hails from Okene in Kogi State.'

Before the statement, Jonathan met in his office with Oniwon and his Special Adviser on Petroleum Matters, Dr. Emmanuel Egbogah.

When Oniwon came out of the Presidential Villa in company with Egbogah, he told journalists that he was not aware of his new appointment.

The statement also announced the appointment of Chief Mike Oghiadhome, the hitherto Principal Secretary to Jonathan, as the Chief of Staff to the President.

Mallam Hassan Tukur becomes the Principal Secretary to the President. With the appointment of Tukur, Mr. David Edevbie, who served the late Yar'Adua in that position, has been relieved of his appointment.

Edevbie had ran into trouble when he took the 2009 supplementary budget to Saudi Arabia and came back with a copy allegedly signed by the then ailing former President Umaru Yar'Adua on his sick bed.

THE PUNCH had last Friday exclusively reported that the President was reviewing the appointments of those who served as Yar'Adua's personal staff.

Niboro, who by his elevation replaces Mr. Segun Adeniyi, said, 'President Jonathan has made new appointments.

'The President thanked the outgoing Principal Secretary to the President, Mr. Edevbie, and the outgoing GMD, NNPC, Mr. Ladan, for their services and wished them well in their future endeavours.'