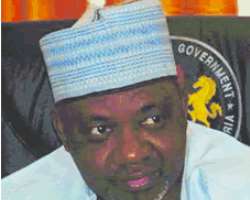 Sambo
The battle over who becomes the next vice president has shifted to the National Assembly where President Goodluck Jonathan's nominee, Governor Namadi Sambo of Kaduna State will be screened tomorrow.

Expectedly, intense lobbying has commenced at both chambers of the National Assembly as those who were dissatisfied with the choice of the serving governor have vowed to frustrate his screening.

Daily Sun's investigation at the House of Representatives and the Senate revealed that while the presidency's nominee may have a smooth sail at the lower chamber, a section of the members of the upper chamber is bent on laying ambush for him.

Their grouse, according to Daily Sun's findings, was about the dropping of former Governor of Kaduna State now Senator Muhammadu Makarfi who was favoured for the plum job by his colleagues.

To underscore the importance of tomorrow's exercise, some governors have moved to the Federal Capital Territory to rally support for Sambo among members of the National Assembly. Among the governors who have deployed their lobbying arsenal in support of their colleague were Bukola Saraki, Gabriel Suswam and Babangida Aliyu of Kwara, Benue and Niger States respectively.

The move may have yielded some results as already, some legislators from the South-South geo-political zone in both chambers of the National Assembly have resolved to give the needed maximum support to President Jonathan regardless of the cost of the doing so, saying that the President is wearing the toga of their zone.

However, unlike their South-South colleagues, legislators from the North West geo-political zone that met between Thursday and Saturday in Abuja are believed to be aggrieved at the refusal of President Jonathan to nominate one of them despite the support they gave him at the risk of their lives and political careers they have thus resolved to map out strategies to unsettle Governor Sambo's approval by the two chambers of the National Assembly.

It was gathered that the leadership of the House of Representatives led by its Speaker, Dimeji Bankole, resolved at the weekend that it would fast-track the confirmation of the nomination of the Vice Presidential nominee irrespective of whatever the Senate might decide on the matter.

Daily Sun gathered from a source close to the leadership of the Senate that the matter was being threaded with utmost caution in order not to hamper the cordial relationship between it and President Goodluck Jonathan, even as it was believed to have expressed its reservation in the rejection of Senator Makarfi who was seen as an experienced politician with both executive and legislative backgrounds that would have served as a good conciliator for the two arms of government.

It was also gathered that the leadership of the Senate was equally conscious of the likely position members of the National Interest Group in the Senate, who were strong supporters of President Jonathan, might take as majority of them were likely to vote in favour of the President's nominee.