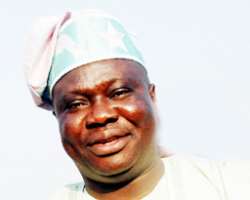 The Lagos State House of Assembly on Wednesday rejected the request of Governor Babatunde Fashola (SAN) on the 2010 supplementary budget.

Fashola had in a letter dated March 22, 2010 asked the Assembly to reconsider some observations in the Appropriation Act to make 'necessary amendments to enable the state to discharge its obligations to employees, contractors and other service providers and in particular, to pursue strategic agriculture initiatives to stimulate jobs and provide security of food particularly staples and vegetables in the short to medium term.'

In the area of personnel cost, the governor had requested N10bn to the approved sum of N45.079bn.

Also, on agricultural projects, he requested for N2.7bn as an addition to the approved sum of N1bn for the Ministry of Agriculture and Cooperatives to cater for rice and vegetable product projects.

He also requested N32bn as financing requirements to be added to the approved sum of N54bn as the fund needed to match finance for the year 2010 budget to forestall shortfall.

At a special plenary session on Wednesday, the Assembly adopted the report of its Ad-hoc committee on the review of the year 2008/2009 budget performance directed to look into the governor's request.

The committee headed by the Majority Leader, Mr. Kolawole Taiwo, rejected many of the areas which the governor sought additional funds.

On financing requirements, the committee said that the request could only be adjusted through approval from the House, adding that the governor could bring a supplementary budget on his request on personnel cost with a detailed analysis from the Ministry of Establishments and Training to justify the need for the requested fund.

The committee refused to grant the request for the removal of the additional sum of N10bn approved as local government intervention fund just as it rejected the demand for the return of N4bn removed from the Ministry of Justice to the capital vote of Lagos State Judiciary.

Meanwhile, the state Attorney-General and Commissioner for Justice, Mr. Olasupo Shasore (SAN), on Wednesday appeared before the Assembly as pledged.

He was summoned by the House on Tuesday to explain the rationale of a letter he wrote on the Assembly's Ad-hoc committee probing allegations of financial impropriety levelled against the governor by a group, The True Face of Lagos.

Before he was invited into the chamber, the Speaker, Mr. Adeyemi Ikuforiji, read a court injunction restraining the Assembly from continuing with the probe.

Ikuforiji, who said the order had an effect on the House and the probe panel as a whole, also described the claimant/applicant, Mr. Richard Akinnola, as trying to stop constitutional activities.

He said, ''He (Akinnola) cannot be a human rights activist, but a human rights killer for he is trying very hard to stop constitutional activities of the House.'

The AG was later 'discharged'. He was accompanied to the Assembly by the Solicitor-General and Permanent Secretary in the state Ministry of Justice, Mr. Lawal Pedro (SAN).

The Assembly also inaugurated a four-man Ad-hoc committee headed by the Chief Whip, Mr. Abdurrasaq Balogun (Surulere 11) to identify modalities and the logistics in hosting the Conference of Speakers of State Legislators of Nigeria and report back to it on May 26, 2010.

The CSSLN's chairman, Mr. Istifanus Gbana, had in a letter dated April 26, 2010 requested the Assembly to host the association's next conference.