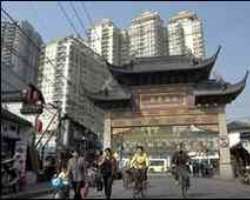 The news will fuel concerns that the world's third-largest economy is overheating and that Beijing may need to raise interest rates.

April's consumer prices were up 2.8% from a year ago, the highest rate in 18 months, and property inflation hit 12.8%, China's statistics bureau said.

Many analysts had forecast an inflation rate of 2.7%.

Foreign investors are watching closely to see whether Beijing moves to cool prices, as this would slow China's economic growth.

Continue reading the main story
Analysts say house prices are unlikely to fall this year, despite the tightening measures adopted by the government

Chris Hogg
BBC News, Shanghai
China seeks to tame property boom
Standard Chartered economist Jinny Yan said he did not think there was an immediate danger of an interest rate rise because of the European debt crisis and fragile international economy.

“What [Beijing] will do is observe external markets for a while longer before deciding what to do,” she said.

But Brian Jackson, strategist at Bank of Canada, was not so sure. “Price pressures have been building throughout the economy, strengthening the case for higher interest rates and a stronger yuan… China is at risk of overheating,” he said.

China's economy grew at an annual rate of 11.9% in the first quarter, driven by Beijing's 4 trillion yuan stimulus package.