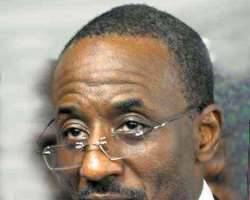 CBN Governor, Sanusi
Shareholders of Deposit Money Banks on Monday reviewed the performance of the economy since the assumption of office of the current Governor of the Central Bank of Nigeria, Mr. Lamido Sanusi, submitted that the banking sector reforms initiated by him had affected the nation's economy negatively.

The shareholders, who came to this conclusion during the 44th Annual General Meeting of United Bank for Africa Plc, therefore, advised the CBN governor to quit.

Nwosu, for instance, condemned the fixing of tenures for chief executives officer of banks, the phasing out of the universal banking model, and the prosecution of the CEOs of the rescued banks.

He said, 'We are not actually against reforms but it must follow due process, which is the normal thing internationally. You can see the damage that this hasty action has already created in the economy. The economy is totally bad whereby if the CBN reforms had been carried out well, it wouldn't have affected the economy as it have done now.

'Nothing is moving in this country and that's why we will continue to have unemployment; this is why we are against the way the management of CBN carried out this reform. Let us look at the issue of tenure. It is not the duty of CBN to fix tenure for CEOs of banks; it is the duty of the shareholders and the directors to do that, unless something is done to correct this, it will kill entrepreneurship in this country.'

Asked whether the shareholders' group had planned any forum to air their grievance with the CBN Governor, Nwosu said, 'We are not the ones to device any forum. If the CBN governor feels that he needs to educate the shareholders, he should device a way.

'Those that dared to go there to see him, he told them that if they have come to talk to him about the decisions that he had taken in the banks, they should go and sell their shares and move to another sector.

'My advice to Sanusi is that he should just resign so that the banking sector can move forward because he has failed. Let somebody who is neutral to the sector and who will not have the type of attack that Sanusi is getting through the misuse of his power come on board.'

Meanwhile, the shareholders at the meeting approved a dividend of N2.16bn and a one for five bonus shares to be paid to them for the 2009 financial period. The amount, which translates into 10 kobo per share, is expected to be paid before the end of this week.

The Chairman of the bank, Mr. Ferdinand Alabraba, put the profit after tax at N2.4bn, indicating a 94 per cent drop from N40.8bn recorded in 2008.

He added that despite the crisis in the sector, the bank would continue to implement strategies that would maximise value for shareholders.