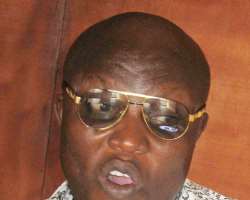 Nollywood producer, Charles Uche Ayika had longed for the day he would produce his own film. For this reason, he immersed himself into the background of Nollywood, learning the ropes. When he felt he had matured, he gathered top class actors including Jim Iyke, Monalisa Chinda, Alex Osifo Remi Ohajianya and a host of others to produce Arrows of Love directed by Uzee Madubuogwu which was released in two parts.

However, it is this film that is causing a bitter battle between Ayika and MYTV, owners of TV Africa Channel 37 with offices at Maitama District, Abuja.

Ayika alleges that TV Africa had been showing Arrows of Love for the past one year.

According to him “when I first noticed the film shown on TV Africa, I wondered how they got my film. I started investigating the matter until we confronted them. But they were quick to say that they didn't have any issues with me as I didn't own any rights to any film.Further query showed that they got the film through one Godson Uzor Nwosu who operates under the name of Guniks Investments. When Guniks was asked, he said it was one Romanus Ibiam Eze, a film marketing agent who sold the right to him.

Speaking further, the producer said the movie which was released in 2008 was shown on TV Africa from June 2009 before it was realized in October, 2009 . There are indications that it may have been shown for a year.

“I discovered this copyright infringement in September of 2009. Known dates of the broadcast were September 24, 2009 and November 11, 2009 on their TV Africa Channel 37. I recorded it on CD, and got my solicitors, K.C. Okolocha and Associates to write MYTV with my findings and claims of damages.

“ It was when I confronted Ibiam Eze that I heard several other stories about how they have been eating from my hard earned production. He had told Guniks that he had a right over my films and sold it to him who in turn sold it to MYTV who has been screening it on their TV Africa channel 37.

I started wondering when I gave my rights to Romanus Ibiam Eze to sell the screening rights to MYTV and TV Africa. I only recall that I gave Ibiam Eze rights on Arrows of Love for Nollywood Channel, UK. To authenticate this transaction, I gave him a covering note and he signed a paper in the transaction that he has not fully paid for. He has even sworn to an affidavit that I gave him rights over my films.

Where is the covering note? I don't think he knows that lying on oath is perjury. You won't believe it, the lies they have been spinning had taken us to the National Film and Video Censors Board, The Nigeria Copyright Commission and the National Broadcasting Commission.

According to the aggrieved producer, he wants adequate compensation for the infringement on my right. “I will fight with the entire blood in me to get redress because I spent so much money to produce the movie and they cannot just grab it like that and show its viewers. I demand N500m from MYTV and TV Africa for pirating my movie being all the costs incurred in producing the movie and fighting this cause.

The law must have to take its course so that it would serve as a deterrent to others.” he said.