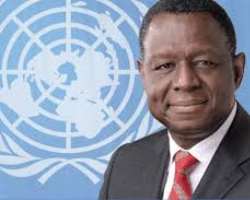 The Executive Director of UNFPA, Prof. Babatunde Osotimehin, in a statement by the Deputy Regional Director, West and Central Africa Region, Ms. Beatrice Mutali, said that “Nigeria requires between US $12 million and US $16 million for the commodities it requires to go round the country annually”.

Osotimehin was in Abuja recently for a three days official visit where he met with various high level stakeholders.

He said, “This is a small amount in view of the return on investment, as nobody can place a value to life.''

He said UNFPA is going to build on the business case for family planning until such a time that Nigeria's budget could carry the responsibility of procuring these commodities.

The executive director said that UNFPA would be glad if Nigeria could reach that stage quickly.

Osotimehin, however, assured that the inability of Nigeria to provide sufficient funds to procure these commodities would not affect UNFPA's contributions to the country.

He said that UNFPA's support has amounted to about $7m for commodities and lifesaving drugs in 2015.

Osotimehin expressed happiness with the level of improvement of the well-being of girls supported by the Adolescent Girls' Initiative of the UNFPA.

He said, “Most of the girls could not speak a word of English about two years ago.

“It was very encouraging that the UNFPA's provision of language, social and educational skills had got the girls this far.”

The statement also said that Nigeria's Minister of Health, Prof. Isaac Adewole, confirmed the release of $3m for the procurement of reproductive health and other lifesaving commodities.

It said the minister confirmed the release of the funds during a meeting with Osotimehin.

The statement said UNFPA would help Nigeria to buy the commodities, as they do for many countries.

It said, “This will ensure that Nigeria gets a larger amount of supplies for the resources they put in.

“Prof. Adewole also said that the money set aside this year is US $3 million and it would not be enough for the commodities as a result of the fragility of the Naira.”