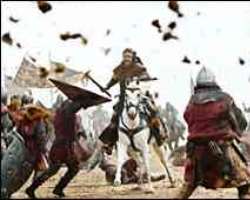 “Everybody appreciates the idea that there's somebody out there who cares, cares enough to readdress the balance,” says Hollywood actor Russell Crowe.

“That's kind of where we've placed this particular character.”

The 46-year-old Australian actor is speaking at the end of a long day on set of his latest movie Robin Hood.

This big budget epic has taken a few liberties with the outlaw's story – Richard The Lionheart is portrayed as a selfish, warmongering Monarch, while the Sheriff of Nottingham plays only a peripheral role.

But Crowe is insistent that certain parts of the legendary story are sacred.

“I think the core thing with Robin Hood is robbing from the rich and giving to the poor,” he says.

Continue reading the main story
Was the fairy story, legend or was he actually real? My guess is he was probably real

Director Sir Ridley Scott
This may aim to be a more thoughtful version of the story, but that's not to say it does not have its fair share of spectacle and action.

Crowe has spent the day filming on a back lot at Shepperton studios, along with hundreds of extras – many dressed as peasants – spilling over an area the size of a football pitch.

A huge recreation of the Tower of London can be seen in the distance, built specially for Sir Ridley Scott's film.

The upper sections of the model are bright blue so the castle can be digitally enhanced to its full glory in post production – a technique the director first used to recreate the Coliseum in his Oscar-winning epic Gladiator.

Grittier and realistic
Although the story of Robin Hood and his Merry Men has been told many times, Crowe insists he doesn't feel constrained by people's expectations of the character.

“Show me the template you think that really is Robin Hood,” he says.

Crowe, notoriousloy taciturn, has unsurprisingly decided upon a grittier, more realistic and believable interpretation – despite his belief that Robin never existed.

“[It's] a fascinating subject to go into, to examine the mythology of something that people so definitely believe is real,” he says. “But there is absolutely no hard evidence to say it is.”

Sir Ridley Scott, speaking in a break between shots, has no such reservations.

Robin Hood is opening the Cannes Film Festival
“Was this fairy story, legend, or was he actually real? My guess is he was probably real.

“He was probably some kind of vigilante fundamentalist, who was working against the constant oppression of the crown, the monarchy and probably the upper classes.”

This is the fifth film Sir Ridley has directed with Crowe in the lead role.

Following Gladiator, they have produced A Good Year, Body Of Lies and American Gangster together – but they have never quite scaled the heights of that first encounter.

“When we were making Gladiator everybody was laughing at us,” Crowe confesses.

“That went on and on for ages, and [it was] probably, only about four weeks before the movie came out that the word of mouth and the vibe changed, that there was something really special.”

However, he refuses to be drawn into whether Robin Hood is the next Galdiator, insisting that is not what they are working towards.

“They're very difficult to make, films like that, to keep people inside the story and inside the time period.

“So Ridley and I are not thinking about that. Everyday on the set we just try and do something special. That's all we're trying to do. So who knows?”