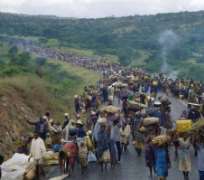 Are West Africa’s refugees as important as Syrian refugees? Judging from the ongoing discussions at the UN General Assembly and the response from member nations, major donors and activists, the answer to this question is a resounding no!

As result of Boko Haram Islamic extremist, propped up with heavy weapons flowing from Libya after the NATO campaign collapsed the country sending its weapons and heavily NATO-armed militants across the Sahel region in Africa, Mali, Nigeria, along with Niger, Chad, and Cameroon have been devastated with a massive refugee crisis of people fleeing violent conflict all over the region.

Today over 50,000 refugee children in the region are in immediate danger of starving to death in the coming weeks and months. There are over 2 million refugees spread out across Nigeria alone, and hundreds of thousands more in neighboring Chad, Cameroon, and Niger. The number of affected persons rivals the over 4 million Syrian refugees that are reported to have fled into Turkey.

The response of the international community however has been comparatively muted. No Pope has come to pick up West Africa’s refugees and bring them to the Vatican, the U.S. President has not made plans to lift 10 of West African refugees to the United States, yet alone a fraction of the 110,000 Syrian refugees he has promised to help relocate the U.S. on top of thousands already brought to the country.

Interestingly enough the campaign for refugees in the region is not asking or seeking to relocate them to another region, which has been highly controversial in the Syrian case. The calls that have fallen on deaf ears, has just been first for food aid, shelter, and basic medical supplies to alleviate the ongoing health crisis.

Moving forward there is also a distant hope for some shanty schools where young displaced children can still learn and get a basic education. In the case of West Africas refugees, all this appears to be too much for the international community to pay attention to.

Over the past several months while aid dollars have continued to flow in support of the ongoing crisis in Syria, very little has trickled to the forgotten refugees of West Africa. Further many countries in Europe have also supported relocating refugees from that crisis in their country at a high cost, something that refugees in West Africa would not even dream of. Many major donors, nation-states have been almost apathetic and/or incredibly slow to act to the crisis in West Africa.

The global media establishment have completely burried the story of West Africas refugees. Not a single major magazine or newspaper has lead with a story and a photo of one of the over 50,000 children set to die among the refugees in the coming weeks and months if something is not done. Only images that keep appearing are those of Syrian children.

In the case of the United States, the administration has been hostile to the ongoing suffering and insecurity. When the Nigerian government sought to purchase weapons and attack helicopters to route out the Islamic Boko Haram terrorists, heavily armed by the Libyan collapse, the Obama administration actively blocked the sale! Later the administration prevented Israel from selling to Nigeria and finally helped block a private dealer in South Africa from selling arms and helicopters to the Nigerian government reportedly in coordinated operation with South African intelligence.

At the same time, the very same Obama administration actively gifted advanced weapons for FREE to unrecognized militants and rebels in Syria and Libya, and the case of Libya some of those same gifts of FREE weapons to militants in Libya fell into the hands of Boko Haram! All the while the same US government was refusing to SELL arms to the recognized democratic government in Nigeria!

The hypocracy shown by the US Government in the crisis was unbelieveable. Needless to say, the heavily armed Boko Haram militants flushed with a cache of heavy weapons coming from Libya (thanks to NATO) caused tremendous bloodshed in Mali, Northern Nigeria, Cameroon, Niger, and Chad until the Nigerian government was finally able to secure new helicopter gunships and advanced weapons from Asia and Eastern Europe to put them down. The very weapons denied them by the US government for over a year.

Fast forward to today, the refugee crisis is in the region is unimaginable. Tens of thousands of refugees sit with little to no food supplies and health crisis seldom seen anywhere in the world. Within a few months tens of thousands of children will die from preventable causes of death such as malnutrition, disease, and lack of clean water. Thousands have already succumbed to the same fate on a daily basis. By all accounts, the condition of a West African refugee in terms of severity rivals the situation facing a refugee in Syria. The number of people facing these conditions in both circumstances are staggering.

It would be one thing if this was happening and the international community was ignoring the plight of all the refugees in general. Yet, this is happening while the crisis of refugees are a major topic of concern to the global community, just not the ones in West Africa. The question is why?

With the preponderance of evidence to the contrary, it is clear that the international community and the global media establishment needs to be reminded that indeed #WestAfricasRefugeesMatter. Their plight should not be ignored. Every effort should be made to aid these people in their time of need. They too are the victims of geopolitical power struggles beyond their control.

For our part, we are reaching out to the African community in diaspora and all those who are interested to support our GoFundMe campaign and to reach out to other major donors and remind them that an African refugee is not worth less than a refugee from anywhere else in the world.

Disclaimer: "The views/contents expressed in this article are the sole responsibility of David O. Kuranga, Ph.D. and do not necessarily reflect those of The Nigerian Voice. The Nigerian Voice will not be responsible or liable for any inaccurate or incorrect statements contained in this article."
Articles by David O. Kuranga, Ph.D.
14-9-2016  Buhari’s Failure To Act Collapses Nigerias Airlines Arik & Aero1-9-2016  Aero Collapses Due To Buhari’s Failure To Act On Aviation1-9-2016  Buhari’s Elitism Leads To Economic Collapse19-7-2016  Nigeria Fails To Meet Q1 Revenue Mark Under Elitist Apc24-6-2016  It's Time For Forensic Audits Of All Nigeria’s StatesMore...