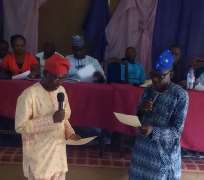 The Nigeria Union of Journalists’ (NUJ) Osun State Council on Thursday passed vote of no confidence on the National Vice President B Zone, Mr. Cosmos Oni and called on the National President Mr Waheed Odusile not to delegate him on any assignment in Osun.

The union at the Congress attended by all Chapel Chairmen and Secretary held at the Olu-Osungboun Hall, NUJ Press Centre Osogbo on Thursday, alleged that the Cosmos Oni is “ supervising criminality and fueling unassay crisis in the state council of the union.

NUJ congress presided over by the Acting Chairman; Mr Kehinde Ayantunji condemned in its totality the violent posture of some individuals who are claiming to be caretaker members of the union and urged the members of the public to disregard them saying that they are still on indefinite suspension since May.

In a communiqués issued after the congress, the union accused the vice president of double standard, dishonesty, deliberate degrading of the union and supervision of criminal activities.

According to the communiqué, “ the conduct of the NUJ Vice President has become a source of concern to the right thinking individuals in Osun and we challenged him to explain his interest in Osun, and why he want to distablise our union, during Ramadam, the same man came to press centre, and asked the thugs to break offices of our union charted away valuable documents that are nowhere to be found.

“ No Trade or Professional union in Osun was known for this criminality in the past not to talk of the prestigious NUJ, until the recent involvement of Cosmos Oni who introduced the idea of burglary, as at the period of this congress, the 22 seater NUJ Bus is nowhere to be found and further investigation revealed that some car theft syndicate and the purported caretaker committee with the support of Cosmos Oni, forcefully broke the ignition of the bus valued at N8 Million donated by the state government and charted it away.”

The union said it is very sure that the National Secretariat of NUJ never delegated Cosmos to be perpetrating criminal activities with intent to drag the name of the union into the mud and we have to inform the people of the state that he is at no period representing the interest of NUJ rather his own selfish interest.”

The congress also said the vice president should be blamed for the crisis in Osun NUJ after the Febuary 11 election.

“To understand the inconsistency of the Mr Comos, he was the one who signed all the delegate lists for the last election, he supervised the election and administered oath of office to elected Chairman and Secretary, Mr Abiodun Olalere and Bola Bamigbola respectively and he was the same person that wrote a report that the election he conducted was flown, then where is Mr Cosmos integrity.”

The union however urged its members to be law abiding and resist all provocations that will further drag the image of the union into the mud.