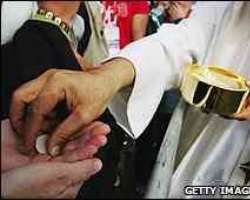 In recent months allegations and admissions of child abuse by priests have shaken the Roman Catholic Church to its core, as a continuous stream of cases has surfaced across Western Europe and beyond.

The Vatican has defended itself by suggesting this is a problem that affects society as a whole, and that the Church has now taken steps to deal with it – an approach that has often provoked more anger and frustration among critics who believe it systematically covered up many cases.

With allegations still surfacing, there is no conclusive account of the extent of Catholic abuse worldwide or its causes.

But current research and expert opinion suggest that men within the Catholic Church may be no more likely than others to abuse, and that the prevalence of abuse by priests has fallen sharply in the last 20-30 years.

What has made the crisis stand out are the cover-ups and other alleged shortcomings in the way abuse was dealt with.

“The real problem is an abuse of authority, the duty of care that pastors have to their flocks,” says the British historian, and former member of the Jesuit Catholic order, Michael Walsh.

“This has been abused and that is the greatest scandal – that's what is systemic, rather than sex abuse.”

'Social problem”
The best-known study on sex abuse by Catholic priests was published in the US, by the John Jay College of Criminal Justice. Commissioned by the US Conference of Catholic Bishops, its main findings were published in 2004, two years after abuse cases threw the Church there into turmoil.

The study established that the vast majority of known cases in the US happened decades ago, though they were only reported much more recently.

Christian Pfieffer
Criminality Research Institute of Lower Saxony
Some 4% of American priests and deacons in active ministry were accused of abusing children in cases dating to the years between 1950 and 2002, the study found, with 75% of the abuses alleged to have taken place from 1960-1984.

The authors of the study say they do not have data on abuse by other, comparative groups in the US – though research on the boy scouts is currently being compiled. But they stress that cases involving Catholic priests should be seen within the broader context of the widespread sexual abuse of children.

“If you think about the vast number of youth that are affected by this you have to look at this as an overall social problem of significant dimensions,” says one of the report's researchers, Margaret Smith.

In Europe, the reporting of cases has accelerated more recently, though the emerging patterns are not uniform and the picture is still patchy.

Abuse 'reduced'
In Germany, the birthplace of Pope Benedict XVI and one of the countries where the Church has come under the most pressure, abuse by priests seems to have been most widespread several decades ago – as in the US – but also relatively contained.

Christian Pfieffer, the director of the independent Criminality Research Institute of Lower Saxony and a former regional justice minister, says about 150 priests in Germany have been accused of abuse alleged to have taken place since 1990.

That is about 0.1% of the 138,000 active priests in the country, he says – though he estimates that the rate of abuse was higher in earlier decades.

“We assume that three-quarters of the cases are old cases from the 50s, 60s and 70s,” says Mr Pfieffer, who has approached German Church authorities about doing a full study of the issue.

In Ireland, where about 1,000 witnesses told the 2009 Ryan report on abuse in Catholic institutions that they had been victims of sexual abuse, that abuse is thought to have peaked at a similar time.

Mr Pfieffer says that in Germany, the attention the subject has gained has led to misconceptions about the extent of abuse.

“There is a big gap between the reality and the public debate,” he says.

“But the public assumption that the German Roman Catholic Church has the same kind of problem as those in Ireland or the United States is wrong, as the quantity is much smaller.”

Overall, from 2001-2010 the Vatican has considered sex abuse allegations concerning about 3,000 priests dating back up to 50 years, according to figures given last month by Monsignor Charles J Scicluna, who as the Vatican's Promoter of Justice heads the office that investigates such cases.

Though the cases were spreading geographically, “the phenomenon itself is much reduced,” he said, noting that there are 400,000 priests worldwide.

Celibacy 'challenge'
But amid intense media attention, questions have been asked – sometimes by Roman Catholics – about whether there are aspects of Catholic priestly life that encourage abuse.

The vast majority of child abuse… is carried out by men who are heterosexual, and many of whom are married

Margaret Smith
Researcher, John Jay report on clerical abuse
Particular attention has focused on celibacy, though many experts dismiss the idea that this could be a direct cause of abuse.

“Celibacy can indeed be a challenge but the vast majority of sexual abuse is not committed by celibates,” says Ms Smith. “We found 4% [of priests] involved in child abuse – that means for 96% celibacy did not present a challenge in terms of child abuse.”

Mr Pfieffer says that in Germany, young priests have told him it would be possible to have sexual relationships with women if they really wanted to – lessening the risk of sexual frustration leading to abuse.

But he also raises the “hypothesis” that paedophiles – who only represent a small minority of abuses – might “become priests because they want to be protected against their hidden ideas”.

Earlier this month Cardinal Tarcisio Bertone, the Vatican's secretary of state, rejected any relationship between abuse and celibacy, linking it instead to homosexuality.

The remarks caused outrage among gay groups, and while research shows that most US victims were teenage boys, that is thought to be because this was the group to which priests had most access. “The vast majority of child abuse [against] both male and female is carried out by men who are heterosexual, and many of whom are married,” notes Ms Smith.

She said she had been asked by a bishop whether there was a greater risk of abuse from homosexual candidates for the priesthood. “I said 'no, our research does not sustain that.'”

Blind eye
Whilst the John Jay has yet to publish a new report on the context and causes of abuse in the US, research to date points to a background of poor screening and training of priests, an over-reliance on psychologists, psychiatrists and lawyers, and an atmosphere of complicity in which people both inside and outside the Church often turned a blind eye to abuse.

In a letter to the Irish people published in March, the Pope placed abuse in the context of “the rapid transformation and secularisation of society”, and mentioned a “well-intentioned but misguided tendency to avoid penal approaches”.

But the idea that secularisation fuelled abuse was challenged by Katarina Schuth, a US expert on seminaries who has worked recently in Europe. She noted that cases appear to have dropped off in the 1990s, even as the social changes continued.

Ms Smith suggests social transformations did play a role in the US in that priests with “little explicit preparation… were responding individually to some of the social influences that the 1960s and early 1970s brought to bear.” But she and Ms Schuth say steps have now been taken to improve screening and training.

“Reports often present the risk as if it were equivalent now to 1980. We don't see that in the United States,” she says.

Whatever the prevalence and causes of abuse, some are warning that the scandal will smoulder on unless institutional changes are made.

Mr Walsh, the former Jesuit, says the crisis of authority that the allegations have brought about “arises out of a culture among the clergy” – one he thinks is reinforced by the insular nature of celibate life.

“That is why I think it's such a threat to the Church and it can only be changed by a regime change, a change at the top, because the Vatican's model is this authoritarian approach to Catholicism and the priests just pick it up.”