Chidinma Dresses in Red to Super-impress 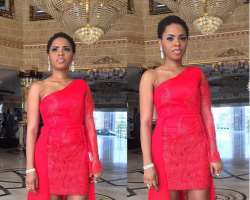 OAP Freeze has been trying to patient with the government of the day but the recent increment in the fuel price has forced him to jump out of his shell. We know the entertainer to be a speaker of many things, there is hardly a situation that happens in the country that he doesn't speak.

We believe that this fuel hike has hit him so hard that he has lamented on what he called ' a tortoise with rigor mortis.' He said “I'm of the humble opinion that when the economic rigor mortis resulting from this fuel hike sets in, and many are faced with the dilemma of choosing between corruption and suffering, a vast majority won't be choosing suffering.”
In his lament, he said “The pain of the poor Nigerian at such a time as this is beyond unbearable. I have always supported this government so I took the slow 'tortoise' pace of its ruling strategy though unnerving, with optimism, believing that the future is going to be propitious if we can eventually get out of this 'alley'..... However, with the latest hike in petrol prices, the slow paced tortoise has developed rigor mortis, which by definition is 'the stiffness of death'. This fuel increase, will only serve to highlight our harrowing plight, in a country where life prior to this act, was already intolerable.

It's like serving a quit notice to a man whose car was stolen the previous day, after he lost his kids in a fire earlier that week. He had also lost his job a month back, due to depression caused by the discovery that his wife was HIV positive during her autopsy.

There is nothing wrong with removing a subsidy that has been the foundation of the most elaborate corruption scheme in the history of this country. However, is now the best time to do it?"