Ini Edo Having Fun Without a Man? 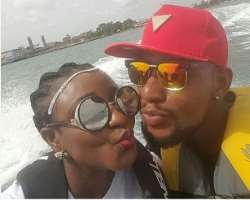 Nollywood actress, Ini Edo, is having fun with her life since her marriage ended some years back as she has proven to be a strong woman which she has always portrayed herself to be.

Since her failed union which some close sources have alleged that it was a planned union so she could used it to penetrate some top political offices in her state,the actress has been seen soaring high with venturing into club business and now on political appointment in her state.

Even rumours alleged that the actress was once having an affair with a top governor of one of the states in the country as she even went as far as acquiring a luxurious bus for a church in one of the states just to show gratitude to God.

Well, as part of her fun life, Ini was recently spotted having a boat cruise with fellow actor, Alex Ekubo, as she wrote thus, "What we do for fun."

She is living her dreams, what are you planning to do?