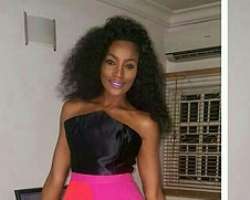 Beautiful and talented singer, Seyi Shay recently trended when she failed to give a correct answer to a question during an interview.

She was asked the full meaning of EP, and she called it electric package, this got lot of people wondering why a well respected singer would disgrace herself like that.

The singer over time has been recorded to always embarrass herself during TV interviews.

Despite the height of criticism she singer got from people, she seems to be unruffled, as she has recently dropped a single titled, pack and go.

The song has been enjoying massive airplay since it's released. Over the weekend the diva stepped out looking stylish to Asa live concert, and one could say, the singer was quite enjoying herself.

Her looks was really breath taking, as she stepped out in a three color tube gown. Her shoes and make up were all on point.

This is the Seyi Shay that is ready to win back the heart of fans she might have lost. Isn't she beautiful? `