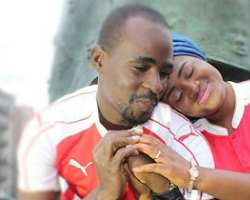 Popular Yoruba actor, Tunde Owokoniran, had in January 2016, pulled a surprise one of many of his friends and fans when he proposed and got married to his US base lover Tunmise.

The actor immediately had a traditional marriage with his bae in Ondo state as few friends and family memebers had to show up to grace the occasion.

After the traditional marriage, the two lovers have been having a good time together with Tunde shuttling between Nigeria and his wife's base as they plan for their white wedding.

Meanwhile, the actor has released some pre-wedding photo-shoot with romantic words of him promising to hold his wife's heart more tenderly than his.