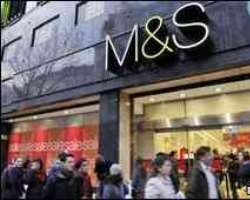 M&S said the pants had been independently tested
Marks and Spencer is making unproven claims about anti-cellulite knickers, consumer group Which? has said.

The label says they are “independently proven to reduce visible signs of cellulite”, but experts told Which? any tight pants would have the same effect.

M&S dismissed the allegations and said the ingredients were “widely used in creams to reduce signs of cellulite”.

On the M&S website, the knickers are listed as containing “three active natural ingredients”.

Marks and Spencer
“Caffeine, to slim and tone; Vitamin E, to help protect against ageing; and soothing Aloe Vera, to smooth. These are held in place by millions of micro-bubbles, then released onto your skin as you move.”

But two consultant plastic surgeons and a dermatologist told Which? that very tight pants without added ingredients could have the same effect, smoothing cellulite temporarily by squeezing fluid out of tissue.

The consumer magazine said: “They were also concerned about lack of evidence that the added ingredients work on cellulite and are in sufficient quantities to be effective.”

M&S said: “This garment is clearly labelled and we refute claims that it could be misleading to consumers.

“It contains ingredients widely used in creams to reduce visible signs of cellulite and the fabric has been independently tested by a specialised laboratory under controlled conditions.”

On its website, it says the “results will vary depending on the condition of your skin and the amount of time you wear the garment”.

Cellulite, which can develop on the stomach, thighs and bottom, is caused in the bands of fibrous tissue which connect muscles to skin.

When fat, fluids and toxins are trapped beneath the skin, the bands become hard and tight and the fat is compressed.

It is this which causes the dimpling or “orange peel” effect.