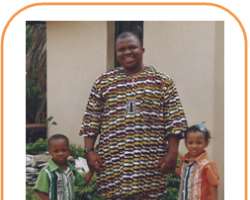 Your Excellency,
Greetings,
Kindly permit us to address our serious concern and complaint to you through this open medium.March 21, 2016 marked the 4th anniversary of late Mr. Emmanuel Chuekwuemeka Udemba’s kidnap and murder in cold blood in Anambra state. Deeply concerned that our previous appeals mightnot have reached their intended destination; your official desk, we have determined that approaching your highly esteemed office through an open complaint and appeal would be preferable.

This is about a lingering kidnap and murder case, which for some unknown reasons, has not beenhonestly investigatedeither by the Nigerian Police Department or the Department of State Security Services. As at today, we have no single evidence to prove that any helpful investigations have been carried out. Your Excellency, the family of late Mr. Udemba needs your help and fatherly intervention now.

Expectedly, the still-suffering widow, children, close relations and townsmen of late Mr. Emmanuel Chukwuemeka Udemba are worried that his kidnap and murder case has not been meaningfully and properly probed. Their worries and concerns are understandable and justified because as long as this criminal case is not thoroughly and urgently investigated, their lives and property will remain under threat and in perpetual danger.

Since the kidnap and disappearance of Mr. Udemba on March 21, 2012, we have severally reported noticeable foot-dragging and apparent reluctance among the police hierarchy and their counterparts to either order or investigate his kidnap and confirmed murder with the transparency and honesty it deserves.

In fact, the seeming reluctance of the appropriate law enforcement agents to investigate this heinous crime in our country has long become as glaring as it is troubling. Every effort made; both written and verbal, to get the police and the Department of State Security Services (DSS) investigate this particular casehas consistently met a brick wall.

Your Excellency, well-meaning Nigerians could testify that for far too long now, both public and private appeals have been made to the appropriate security agents and to the Federal Government with heartfelt pleas for an independent and transparent investigation into the kidnap and murder of late Mr. Udemba. Late Mr. Udemba was a plywood dealer and a good citizen of Nigeria.

His sudden kidnap and murder in cold blood; despite constrained and inevitablepayment of ransom for his release, haveindeed left every one of us speechlessly concerned. May we restate that late Mr. Udemba was not affiliated to any political party but a demonstrated patriot and committed citizen of Nigeria.Since his kidnap and murder could hardly be glossed over or shrouded in a continued untold ‘mystery’, we are hereby appealing to Your Excellency to please order a totally independent investigation into the kidnap and murder of Mr. Emmanuel Chukwuemeka Udemba.

Suffice it to mention that a notable breakthrough and attempts by a few dedicated police officers from Delta state to get to the masterminds and sponsors of Mr. Udemba’s kidnap and murder was recorded in 2014.However, that was purposefully ruined in Anambra state under the watch of the Commissioner of Police and his colleagues at that time following an unavoidable case transfer.

Also, there have been consistent allegations from reliable sources that a disingenuous three-man gang bought some of them over before this heinous crime was committed in Anambra state. A thorough and transparent investigation will definitely reveal the part each person played in this man’s kidnap and murder story. Since late Mr. Udemba’s kidnap and murder should not be shrouded in acontinued untold ‘mystery’,we are hereby appealing to Your Excellency to please consider the plight of his surviving but suffering widow and children andorder a totally independent investigation into the kidnap and murder of Mr. Udemba.

Your Excellency, it might interest you to know that for various other reasons coupled with ardent desire to have the kidnap and confirmed murder of late Mr. Udemba investigated his family, friends, relations and well-wishers prayed for a change in administration. Moreover, theyactively and massively voted for the new government and administration. Thankfully, their prayers were answered over your person as the current president of the Federal Republic of Nigeria.

Investigations reveal that those whom people have been pointing at as potential sponsors and masterminds of late Mr. Udemba’s kidnap and murder have not relented in their clandestine and behind-the-scene machinations aimed at locally intimidating people who made his burial and funeral possible. Those people were reported to have shamelessly, openly and actively worked against late Mr. Udemba’s planned burial and funeralwhich took place in December, 2015. The question that people have continued to ask is -why?

Why would a thing of this sort be allowed to happen in our country? Your Excellency, if this type of unscrupulous behavior does not intensify the longstanding psychological trauma and perpetual fear of Mr. Udemba’s surviving widow, children, his friends and well-wishers we wonder what would?Late Mr. Udemba’s surviving family and widow need your help and intervention.

Your Excellency, leaving this type of heinous crime continuously shrouded in ‘mystery’without an honest investigation constitutes a perennially grave danger to the lives and property of the family that late Mr. Udemba left behind.We are hereby appealing to Your Excellency to please order a totally independent investigation into the kidnap and murder of Mr. Emmanuel Chukwuemeka Udemba.

At this juncture, every one of us is interested in knowing what the problem is; especially when every piece of evidence was made available since 2012 to help the police and the DSS end this unnecessarily brutal issue. Unfortunately, that has not happened. We are still in shock that up till now, Mr. Ballah Nasarawa, Mr. Dibal Yakadi, Mr. Emeka Chukwuemeka and Mr. Alex Okeiyi have nothonestly put heads together to courageously produce the masterminds and alleged sponsors of the kidnap and murder of late Mr. Udemba. But someone, necessarily, has to compel them to do so.A widow and her children are still suffering endlessly in our country. We hope that this matter would not be viewed as an issue of far less important than other commitments you have on your desk.

Your Excellency, this suffering family still needs your help and fatherly intervention. Because of the nature and duration of this case, we strongly believe that you;as our president and every single Nigerian, deserve to know all those responsible for the kidnap and murder of a good Nigerian, who toiled and moiled every single day to put food on the table for his family.

We believe that his family deserves a transparent report from an honest and independent investigation into this heinous crime; at least to set an example for others who may be planning such things in Nigeria in the future. We all believe in one Nigeria that is free of corruption and deliberate injustices. With this open appeal, we fervently hope that you would, at this time, kindly listen to the continued cries of the surviving and suffering children and widow of late Mr. Udemba.

Faithfully Yours,
Mr. Justin C.O. Okongwu
Submitted on behalf of the Supporters and Sympathizers