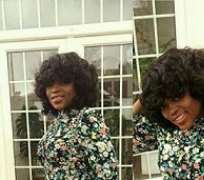 Nollywood actress, Funke Akindele, is not slowing down just to catch a grove of the London fever where she had travelled to celebrate her man's birthday, JJC Skillz.

Funke all wanting to live like her foreign counterparts was seen dressed in a gown and black tight just the way the Whites dress forgetting that she is an African woman who can adapt to any weather.

While some of her fans criticized the dressing, some feel her hairdo was just not on point. Well, everyone is entitled to their opinion.